We are officially more than one quarter through the Saskatchewan Sports Hall of Fame’s (SSHF) 50th year. While we have already started celebrating this historic anniversary, some of our biggest events are still to come.

I would first like to remind everyone that we will not be having a formal induction this year. However, we have many exciting events on the horizon that will give everyone in the province a chance to celebrate our anniversary with us. These events will include a traveling exhibit, a one-woman play and a gala, which will all be explained in detail throughout this newsletter.

It is our hope that, in doing so, we will be successful in celebrating the phenomenal sports history of all 505 inductees, including: 223 athletes, 158 builders and 124 championship teams, whose stories have been housed inside of our walls for all these years.

The staff has also been hard at work planning and executing the first four events in our “12 months, 12 Events” series. The two most recent of these events were prepared in conjunction with major sporting events happening in the province. Our February event saw the staff, along with 15 curling inductees, travel to Swift Current – the host site of the 2016 Ford World Women’s Curling Championships.

Our fourth event saw us team up with The Keystone Cup, a prestigious Junior B Hockey Championship that was being hosted in Regina for the first time. The tournament was a great excuse to bring a handful of our inductees together. 2015 SSHF inductee Cliff Koroll flew in from Chicago, while two members of the 1968 Team Canada Olympic Team, Morris Mott and Terry O’Malley, joined us as well.

Fans in attendance during both events were given the opportunity to ask questions of our inductees, get autographs and pose for pictures. I would like to specially thank the Ford World Women’s Curling Championship organizing committee, The Keystone Cup organizing committee and our event MC’s Taylor Shire and Candace Woodside for helping to make these events possible.

On behalf of the SSHF Board of Directors I would like to wish you the best for the remainder of the spring season and upcoming summer season.  Please stay in touch and stay connected with the SSHF (and encourage friends and family to do the same) through our Social Media channels.

To find out more on our latest happenings at the SSHF, download the full version of the newest For The Record, right here:

Work continues on the development of this one-woman, one-act play written by Maureen Ulrich of Menagerie Productions.  As with the majority of creative projects, changes are being encountered throughout the development process.  Since the release of our February/March 2016 newsletter there have been a number of changes to the previously announced performance schedule.  We would like to take the opportunity to provide everyone with a revised schedule in order to facilitate the planning of audience members to attend a performance in their vicinity.  Full details with regard to ticket price and purchasing options will be released in early May. 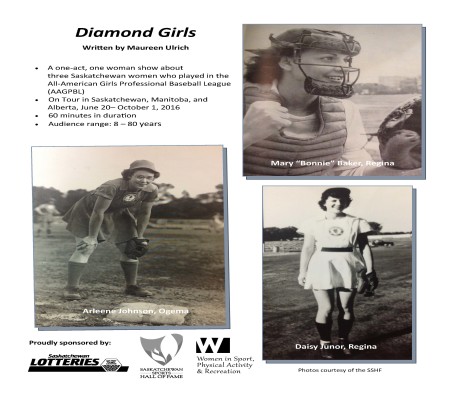 Throughout our 50th anniversary the primary goal of the SSHF is to celebrate our inductees and showcase their back stories and accomplishments for the people of Saskatchewan. One very unique opportunity presented itself when Menagerie Productions and playwright, Maureen Ulrich, proposed a one-act, one-woman play featuring the Saskatchewan connection to the All-American Girls Professional Baseball League as a project to be pursued through the SSHF’s Sport History grant.  With the support of Softball Saskatchewan, Women in Sport, Physical Activity & Recreation, and Saskatchewan Lotteries the project has become a reality.  Here is Maureen’s back story to this unique 50th anniversary project.

DIAMOND GIRLS: DIAMONDS IN THE ROUGH

Writing a one-act, one-woman show about the rise and fall of a baseball league is challenging, especially when eighteen players plus officials, fans, and coaches are required to play an actual game. Diamond Girls focuses on the involvement of three Saskatchewan women – Arleene Johnson Noga, Mary Baker, and Daisy Junor – who participated in the All-American Girls Professional Baseball League (AAGPBL) during the 1940’s.

My relationship with Diamond Girls began with a Leader-Post article about a dedication to Mary Baker at Central Park, Regina. A League of Their Own is one of my favourite movies – and I wanted to learn more about the role Mary and other Saskatchewan women played in the AAGPBL. 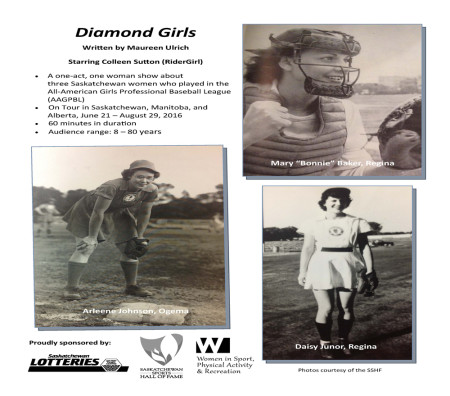 It has been thrilling and sobering to get to know them through nonfiction books, newspaper and magazine articles, yearbooks, letters, photographs, and interviews with their families and Arleene herself. Mary, Arleene, and Daisy not only played in the AAGPBL – they were stars. Furthermore they didn’t stop competing when their pro baseball careers ended.

I deeply regret never starting down this path sixteen years ago when I first met Arleene – when many of the Saskatchewan ladies were still alive – but it simply did not occur to me. Nevertheless, Arleene, who played ball for six decades, has lost none of her passion or loyalty towards a league that sent her on countless road trips, many miles from home, to play in front of thousands of fans and set fielding records. In sportswriter Ned Powers’ words, “There are a few women who could play a position as well as a man, and Arleene was one of them.” Yes, Arleene has fueled my fire to get these three characters on stage as quickly as possible.

My first draft merely told their stories, but over time their competitive, vibrant, baseball savvy personalities have emerged, showing the audience how unique their experiences truly were. A process of continual revision has begun, as each word of dialogue and direction is carefully considered. How can I provide actress Colleen Sutton (RiderGirl) with the tools she needs to create clear and lasting images in the minds of her audience? After all she will be roleplaying multiple characters in a variety of settings – baseball diamonds and hotel rooms, even a television game show. Naturally I will lean heavily on Colleen’s comedic and dramatic expertise. It is our goal to make every “inning” of Diamond Girls (yes, there are nine!) funny, gritty, enlightening, or poignant.

Like the AAGPBL teams, Diamond Girls will be on the road most of the summer.  Therefore, the set design must be minimal. Projections will be used at the beginning of the play both to create nostalgia and to acquaint the audience with the faces of all 25 Saskatchewan players. Two AAGPBL uniforms will be fabricated, as damage or loss of this important element would be devastating.

We are four months away from our first rehearsal in Estevan, but the groundwork for a solid, accurate, and entertaining story is slowly and carefully being laid. We hope you will see Diamond Girls if it travels to a community near yours. If you are interested in hosting a performance, please contact me or Sheila Kelly, as the tour schedule is still evolving.

*UPDATE: Please note that dates have changed for Diamond Girls performances. Updated information will be released in early May!