Regina – Saskatchewan Sports Hall of Fame (SSHF) was named Business of the Year (Under 20 Full-time Employees) during the 28th annual Saskatchewan Tourism Awards of Excellence Gala, which was celebrated on April 5 at the Sheraton Cavalier Saskatoon Hotel. Other finalists in our category included Harvest Eatery and Fresh Market, Shaunavon, and Last Mountain Distillery, Lumsden.

The SSHF nomination was derived on the basis of our 50th Anniversary year and the “big three” activities including Diamond Girls, 50th Anniversary Traveling Exhibit and 50th Anniversary Gala.  We would like to recognize and thank a number of key people and organizations who were instrumental in making our 50th Anniversary events, and thus this award selection, successful. Maureen Ulrich for her engaging & entertaining Diamond Girls script,  Malia Becker for bringing history alive through her stellar performance of 21 characters!, director Kenn McLeod, technical director William Hales, and stage manager Shelby-Lyn Lowe. All of our inductees, some of whom traveled great distances, and chose to participate in one or more of our anniversary events including our 50th Gala reunion celebrations.  And last, but not least, to our key sponsors who shared the vision and passion  in taking Saskatchewan’s sport history to the entire province including Saskatchewan Lotteries, Community Initiatives Fund, Saskatchewan Blue Cross, Creative Display, Sterling Truck & Trailer Sales, Hornoi Leasing, SaskTel and SGI.

We also wish to extend a heartfelt thank you to Tourism Saskatchewan for this award, as well as to our award sponsor, the Saskatchewan Indian Gaming Authority. We could never have imagined a more perfect end to our 50th Anniversary year. 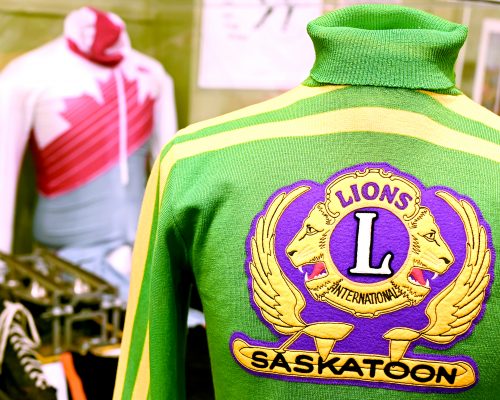