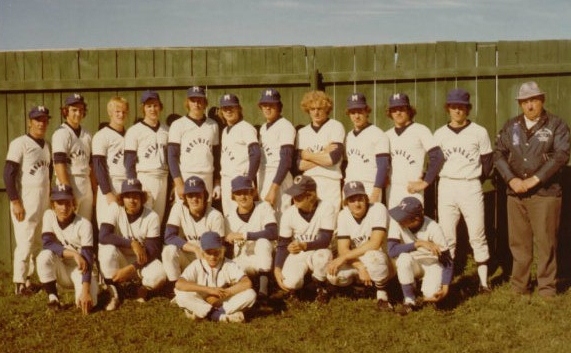 Bob Stewart coached the 1973 Melville Elks.  He coached some of the boys for more than ten years, and managed to have 12 players returning from the previous season.  At the 1973 provincial playoffs the Elks won eight games and lost two, outscoring their opposition 91 runs to 43.  They sidelined the Regina Pacers, Regina Highnooners, Regina Steelers and the Viscount Atlases to win the provincial title and the right to represent Saskatchewan at the National championship.

Barrhead, Alberta hosted the first ever Canadian Midget Baseball Championship in 1973.  Seven provincial and regional championship teams from across Canada were placed in two pools.  In their pool, the Elks won two games and lost one which earned them a spot in the semifinal.  They won their semifinal against Niagara Falls, ON and faced Cardale, Manitoba in the final game.  Cardale had beaten the Elks 10-6 in the round robin, but the Elks came back in the final to win 14-8 to claim the first ever Canadian Midget Baseball Championship.