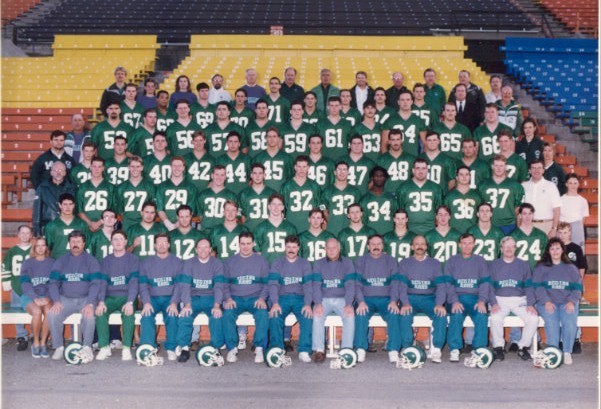 The 1993 Rams were class of the Prairie Junior Football Conference (PJFC) enjoying a perfect 8 and 0 season. Their league play saw them defeat the Edmonton Wildcats 44-25, the Edmonton Huskies 28-14, the Calgary Colts 36-22, and the Saskatoon Hilltops 26-13 in the first four games. In the second half of the season they continued to win, racking up another four straight victories. The Rams opened the playoffs with a very convincing 50-19 thrashing of the Calgary Colts. They followed this up with a 30-15 PJFC final win over their northern rivals, Saskatoon Hilltops.

In the Western final at Taylor Field, they won another lopsided victory, 43-12, over the Surrey Rams to move to the Canadian championship. The championship game was played in Regina, behind quarterbacking of Darryl Leason, who was chosen as the game’s Most Valuable Player; the Rams defeated the Hamilton Hurricanes 23-11. This marked the Rams’ eleventh national championship.

Head coach, Frank McCrystal, was named the Canadian Junior Football League’s Coach of the Year and was presented the Gord Currie Award for his efforts. Centre, Tim McFadden, was named the PJFC’s Most Valuable Offensive Lineman and Darryl Leason captured the league’s Most Valuable Player during this most successful season.

Installed in the Saskatchewan Sports Hall of Fame on June 17, 2006.