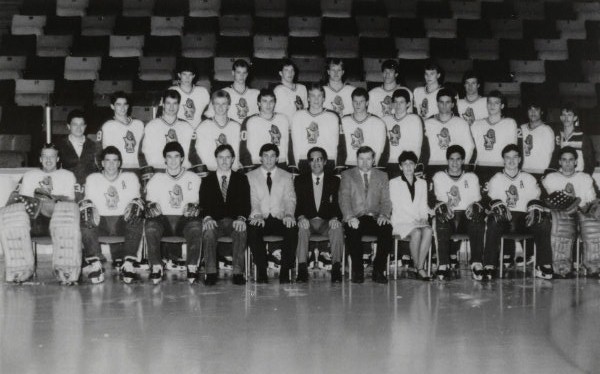 The 1984-85 Prince Albert Raiders began their season never expecting such success; yet with the help of goal scorers like Dan Hodgson, Tony Grenier and Dave Pasin, the team soon reached the top of its division. The Raiders finished first in the Western Hockey League’s eastern division with 119 points – 58 wins, 11 losses and 3 ties. Center Dan Hodgson completed the season as the league’s top scorer with 70 goals.

In the playoffs, the team first beat the Calgary Rangers four games to none and then lost only one game in a five-game series against the Medicine Hat Tigers. Again, the Raiders were victorious in facing the Kamloops Blazers; they won four games to zero. In the Memorial cup, the team encountered the Verdun Canadiens and the Shawinigan Cataractes, both of the Quebec Major Junior Hockey league, and the Sault Ste Marie Greyhounds of the Ontario Hockey League. Prince Albert took the championship in just five games, losing their first and then winning four straight. Team captain Dan Hodgson was named Most Valuable Player, Gord Komonosky was designated the Outstanding Goalie, and Tony Grenier was voted as the tournament’s Most Sportsman-like Player.

While only three years earlier this hockey team had been a part of the Saskatchewan Junior Hockey League (Tier II), it was now a respected member of the Western Hockey League (Tier I). Under Coach and General Manager Terry Simpson, the team reached a hallmark; it brought home Prince Albert’s first Memorial Cup.

Installed in the Saskatchewan Sports Hall of Fame and Museum on June 15, 1991.