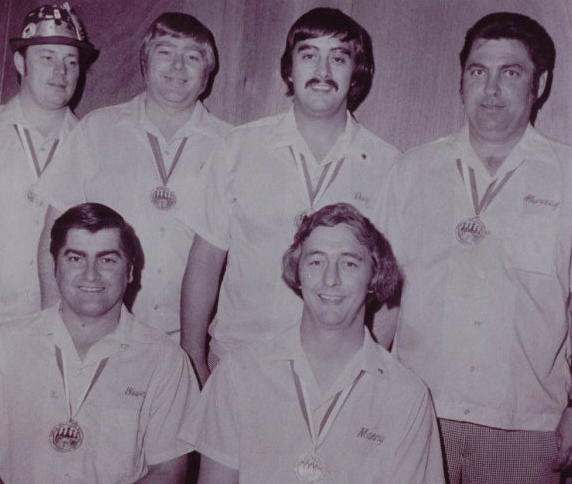 The team of Brian Falconer, Manny Primeau, Doug Primeau, Wayne Akers and Bill Miller was formed in 1975 and became one of the best bowling teams ever to come out of Prince Albert. They bowled together for 10 years, winning Prince Albert city tournaments and house play downs, and ultimately the World Bowling Championship.

All of the members of the team are lifelong bowlers. Bill Miller made appearances in 30 provincial, western Canada and national championships. In 1986 Manny Primeau, Doug Primeau, Wayne Akers and Brian Falconer established a Saskatchewan men’s team single game record of 1,616 points which still stands today. The members of the team coached Youth Bowling Council teams in Prince Albert and the achievements of the team have inspired bowlers in the Prince Albert area.

The team dominated the field at the 1978 Saskatchewan championships, winning 12 of its 14 games. They advanced to the World Men’s 5–Pin bowling Championships, held in Thunder Bay, ON on May 18-20, 1978. The teams at that championship were all Canadian, but the Canadian Bowling congress, as the world leader in 5-pin bowling, had named it the world championship.

The Prince Albert team, coached by Murray Kyle, won 12 games and lost six games at the world championships. Nearing the end of the competition, the team realized that they would have to win their last two games to win the title. In the second last game, they beat the Alberta team by a slim nine pins, which kept them alive for the final round.
In the final game, the Prince Albert team scored 1, 478 points to Manitoba’s 1,106 points. This clinched the championship for Saskatchewan. The scores were so close that if the team had lost its last game they could have finished the tournament in third place. The championship was one of the most memorable in Canadian 5-pin bowling history, featuring the drama of a closely fought competition.

Installed in the Saskatchewan Sports Hall of Fame and Museum on June 19, 1999.