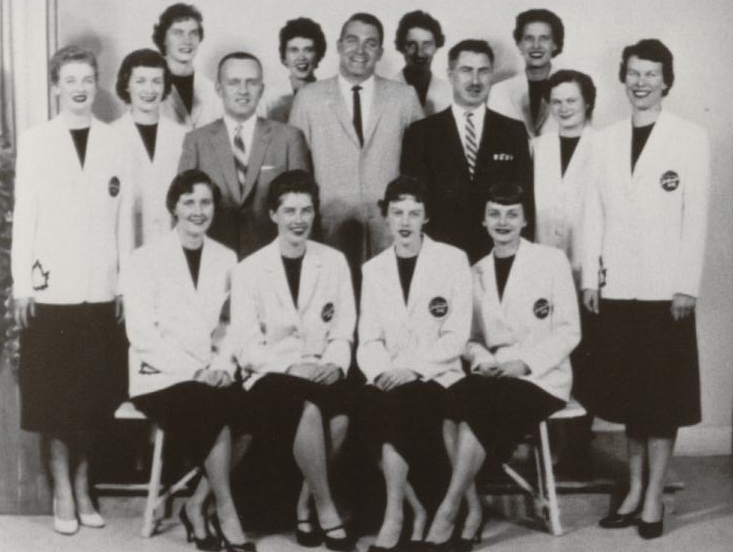 The Saskatoon Adilman Aces, named after their coach and sponsor Jack Adilman, had created a strong tradition since starting in 1948, but it was not until 1959 that they captured the Canadian title. With years of experience, depth in the lineup, and team spirit, the 1958-59 Aces were a force to be reckoned with. In league play the team excelled with Lee (Fior) Walshe winning the league’s scoring crown and Judy (Holt) Vance tied for second.

En route to the Dominion finals the Aces added another offensive threat to the lineup, Pat Lawson who was a former coach of their rivals the Saskatoon Huskiettes. With this addition they went on to beat the Moose Jaw Deuces in a two game total point series for the provincial title and a berth to the Canadian Dominion finals. Again, wanting to strengthen the bench they added two players from the Moose Jaw Deuces: Arlene (Slowchek) Diduck and Arlene (Raycroft) McGinn.

The Saskatoon Adilman Aces headed to Calgary where the Canadian Dominion Championship would take place. After a one win and one loss record in the round robin, the Aces met the Toronto Teamsters in the semi finals. A hard fought battle led to the Aces edging out Toronto with a 61-45 victory. The Aces advanced to the final to meet the heavy favourite of the tournament, the Vancouver Eilers who had their sights set on their tenth consecutive championship.

In the final, the Aces were down 37-28 at half time but the underdogs battled back playing confidently and patiently in the second half. With three minutes and ten seconds left, the Aces took the lead and captured their first ever Canadian Senior Women’s Basketball Championship. The final score was 55-49, with the main contributors being Holt and Fior who had 19 and 16 points respectively.

Along with winning the Canadian title, five members of the Aces formed the nucleus of Canada’s entry to the 1959 Pan American Games held in Chicago. Lee (Fior) Walshe, Judy (Holt) Vance, and Judy Jenkins were all named to the Canadian Senior Women’s Basketball All-Star team. The conduct and achievements of this championship team did much to foster the cause of ladies basketball in Saskatchewan.

Installed into the Saskatchewan Sports Hall of Fame on March 30, 1974.