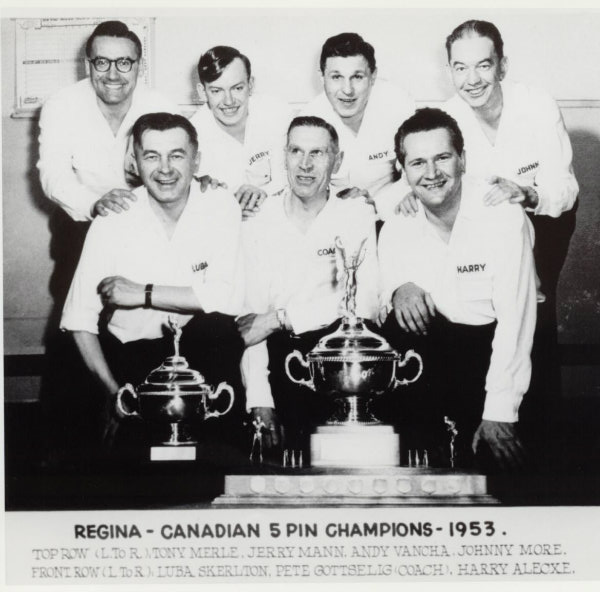 The first ever Canadian Men’s Five-Pin Bowling Championship was held in Regina at the Bolodrome in 1953. Chosen as the western representatives, the Regina team would get to bowl in front of a home crowd. Coached by Peter Gosselig, the team of Luba Skerlton, Harry Alexce, Jerry Mann, Johny More, Tony Merle and Andy Vancha made history as the first Canadian Men’s Bowling Team champions.

The Regina team faced off against the eastern representative, the Ontario team. Regina trailed behind in the first five game block, played under western rules by 33 pins. Going into the final game of the second five game block Ontario was ahead by 32 pins. Staging a huge comeback Regina won the championship by 47 pins. The tenth end’s final score was 1,133 to 1,054 in Regina’s favour. The Regina team put down a combined total of 11,693 in all ten games. Jerry Mann led with 2,525, followed by Harry Alexce with 2,308, Johny More with 2,271, Andy Vancha with 2,336 and Luba Skerlton with 2,253.

Interestingly enough the Regina team would have only won by 42 pins if the all the blocks would have followed the Western rules and by 120 pins if the whole series was played under Eastern rules.