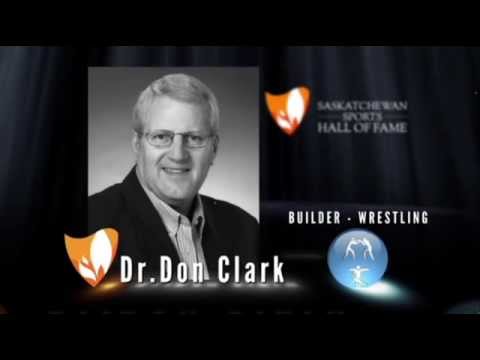 Don Clark distinguished himself as a leader while a student athlete at the University of Saskatchewan. He was named captain of the Huskies football team for the 1964-65 season, and won the Rusty MacDonald Cup—awarded for leadership, sportsmanship, athletics and academics—that same year. As a member of the wrestling team in the heavyweight class, Clark won a conference championship in 1965, and a provincial championship in 1967.

It was after his career as an athlete ended, however, that Clark would make his most lasting contributions to sport. After a brief stint as an assistant coach with the Huskies football team, he took a job at the university’s Regina College in 1970, and soon became the coach of the wrestling club. It was a position he would hold until 1985. In every year Clark was in charge of the program, the Cougars produced at least one conference champion. In 1983, he was named Great Plains Athletic Association Coach of the Year.

Clark’s success as a coach brought him to work with the Canadian National Men’s Wrestling team. He was team manager for the 1977 and 1991 World University Games and the 1978 Commonwealth Games. In 1980 and 1984, he worked as a coach during the team’s Olympic training camps. And finally, in 1996, he served as the Canadian Team Wrestling Leader at the Olympic Games in Atlanta.

Clark’s commitment to wrestling went beyond coaching. During the same time period he was the Cougars’ head coach, he was also a member of the executive of Saskatchewan’s Amateur Wrestling Association (SAWA), including a twelve-year term as SAWA’s president from 1973 to 1985. His work with SAWA led to him becoming a founding member of Sask Sport in 1972. He became Sask Sport’s first Vice-President of Sport from 1997 to 1999. And Don served as Vice-President for the Canadian Amateur Wrestling Association from 1997 to 2002.

Although Clark retired from coaching in 1985, he remained active in sport as a volunteer. He became the Director of the National Coaching Institute in Saskatchewan in 2008, and still held the position as of 2012. In 2010, he went to the Vancouver Winter Olympics, this time as the Managing Director of the Saskatchewan Pavilion.