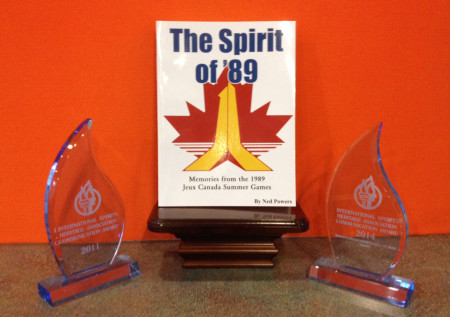 The Saskatchewan Sports Hall of Fame (SSHF) is pleased to announce that The Spirit of ’89: Memories from the 1989 Jeux Canada Summer Games, co-published by the SSHF and The 1989 Jeux Canada Games Foundation, has been awarded an “ISHY” from the International Sports Heritage Association (ISHA) as the best book publication in the industry for institutions with a budget greater than $250,000 US.

Publications are adjudicated by our peers in the industry on the basis of how well they feature a member institution, collection, resources and/or inductees of the Hall of Fame.

The SSHF is dedicated to the celebration and interpretation of sport excellence and preserving the sport history of our province. One of the means by which we achieve our mandate is through our Sport History Project (SHP) which allows us to capture the history of organizations or events through different mediums. The Spirit of ’89 was produced under the auspices of the SHP and was written to capture the history of a major sporting event in Saskatchewan and Canada; to showcase the spirit of the people of Saskatoon in hosting the Games; and to commemorate the significant legacy components of the Games. Not only did the Canada Games leave Saskatoon with a wealth of facilities after the Games, the prudent financial stewardship of the Games resulted in a net profit of $1,319,663 from a $24 million+ budget. These funds, invested wisely, have resulted in $100,000 worth of grants being distributed annually to amateur sport programs throughout Saskatchewan resulting in the continued development of sport and providing opportunities to future world class athletes. The legacy of the Games continues.

Ironically, in capturing the history of the 1989 Jeux Canada Games, The Spirit of ’89 also captured historical anecdotes for a number of our hall of famers. Forty-two inductees, out of 498 at the time of publication, are represented in the book.

ISHA is a membership organization incorporated in 1971 to assist sport museums and halls of fame to develop, operate and promote their facilities in the best way possible. Member institutions are currently located throughout North & South America, Europe, Africa, Asia, Australia and New Zealand.