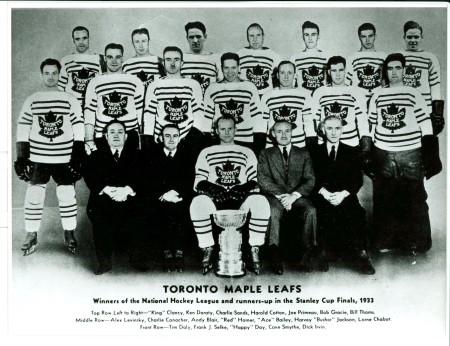 A product of Stittsville, Ontario Ken Doraty moved to Saskatchewan in his youth where he excelled as a hockey player. In 1925, Ken Doraty played with Western Canada’s first Memorial Cup winners, the Regina Pats. The following year Doraty turned pro with the Portland Rosebuds and in 1927 he was named to the Chicago Blackhawks roster.

Unfortunately, size did matter for Doraty and the 128-pound player went in and out of the minors for a couple of years until the Toronto Maple Leafs obtained Ken in 1932. That season the Maple Leafs met the Boston Bruins to play for the Stanley Cup. After 60 minutes in regulation, along with 104 minutes and 46 seconds of overtime the game was scoreless. As the scoring leader of the 1933 Canadian Division Stanley Cup playoffs it was only fitting that Doraty scored the winning goal to end the game and capture the championship.

On January 16, 1943, Doraty set a record for the fastest three overtime goals ever scored in the National Hockey League regular season play, under five minutes and ten seconds, against the Ottawa Senators.

Following his playing career he coached the Moose Jaw Canucks, taking them to the Memorial Cup finals in 1947.