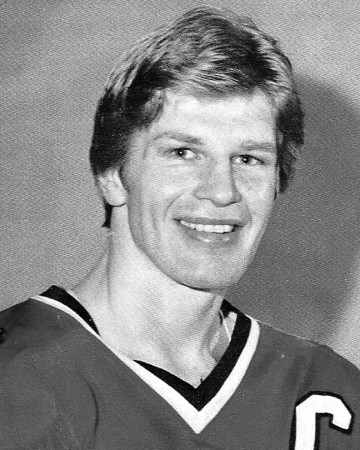 Wadena’s favourite son, Keith Magnuson, is also one of the Chicago Blackhawks most memorable defensemen.

Magnuson’s journey to the National Hockey League (NHL) began in 1964 when he joined the Saskatchewan Junior Hockey League’s Saskatoon Blades. After one season, Magnuson made a bold move and jumped to the University of Denver to play with his best friend, Cliff Koroll. Together the two future NHL teammates led the Pioneers to National Collegiate Athletic Association (NCAA) championships in 1968 and 1969.

Magnuson, who was chosen as a NCAA all-star during his final two college campaigns, realized his boyhood dream of playing in the NHL when he signed a free agent contract with Chicago in 1969.

The fiery defenceman would become a stabilizing factor on the Blackhawks blue line for many years.  Magnuson, who played in the 1971 and 1972 NHL All Star games, is best known for his leadership and his willingness to defend his teammates. During his NHL career, the former Chicago team captain played in 589 games and amassed 1,442 career penalty minutes, second most in team history.

At the time, Magnuson’s aggressive style of play characterized the spirit of Blackhawk hockey, which was greatly appreciated by the fans. As tough as Magnuson was to play against, he was always a gentleman off the ice and would stay late after games to sign autographs for fans.

Magnuson’s rough and tumble play took its toll on the veteran blueliner and a knee injury in 1979 forced him to retire.  His career in Chicago continued as Magnuson became an assistant coach before being hired as the Hawks’ head coach in 1980.

After leaving the bench, Magnuson helped establish the Blackhawks alumni association while making many appearances on behalf of the team.

In December 2003, at the age of 56, Magnuson tragically passed away in an automobile accident while returning from the funeral of former NHL player, Keith McCreary.

A banner with his name and his retired number 3 was hung from the rafters at the United Center in 2008.