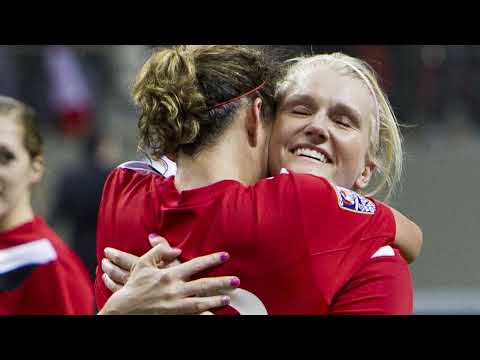 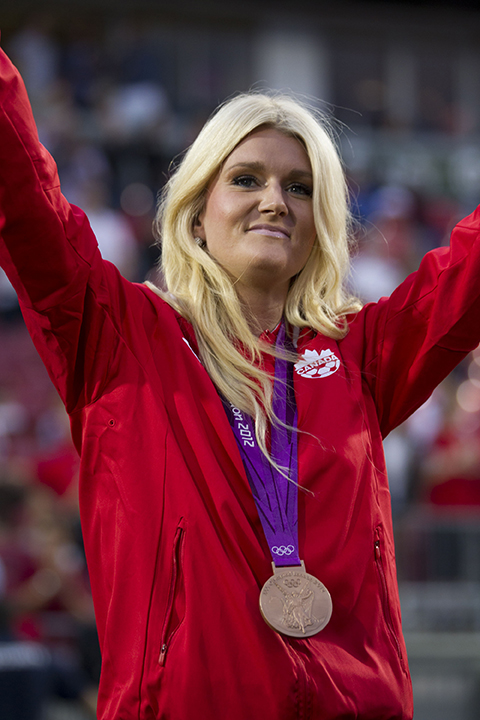 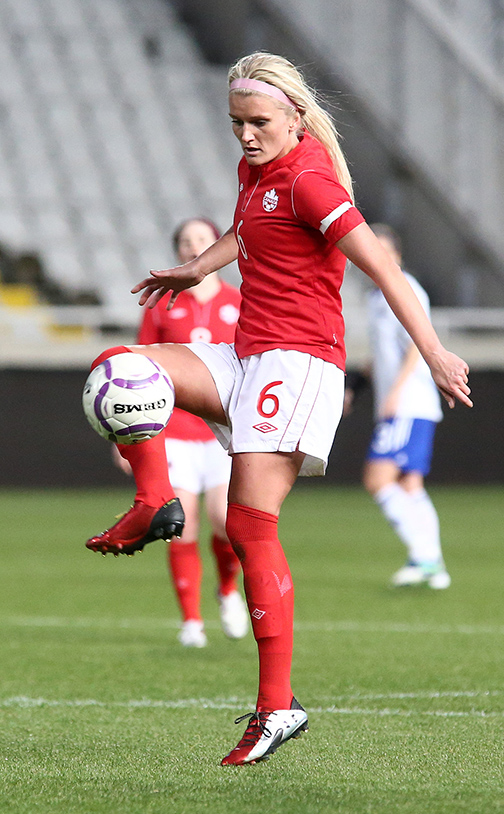 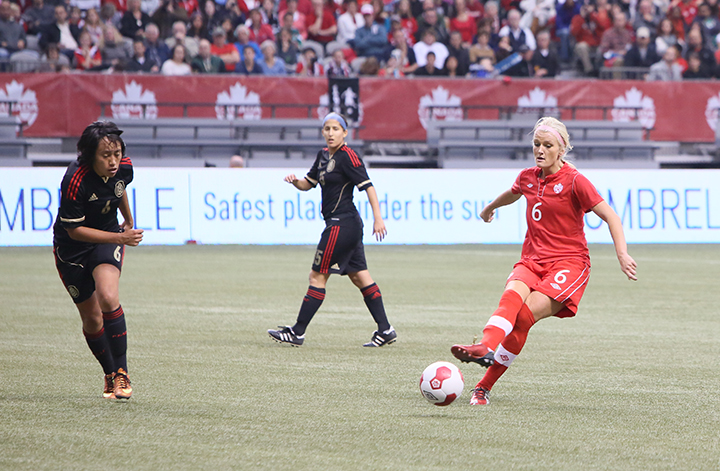 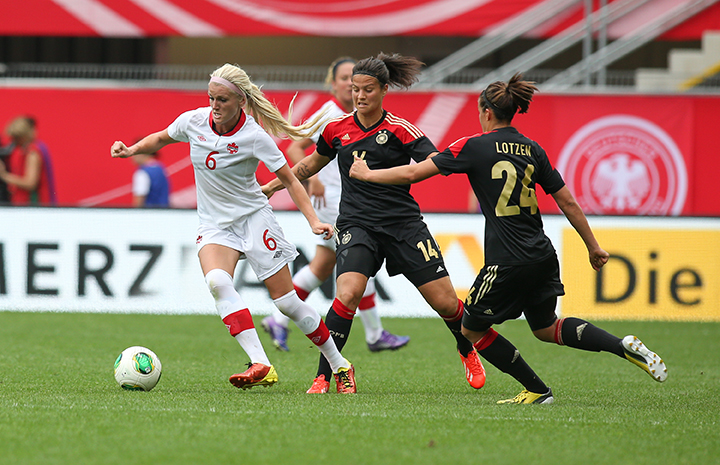 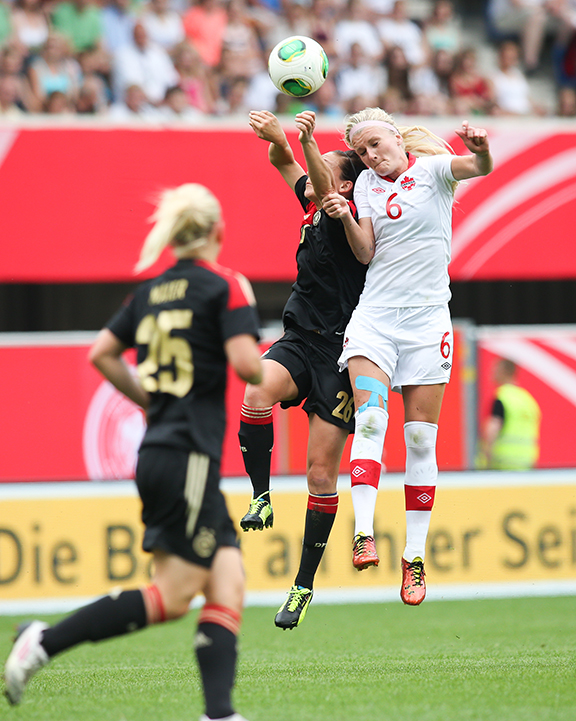 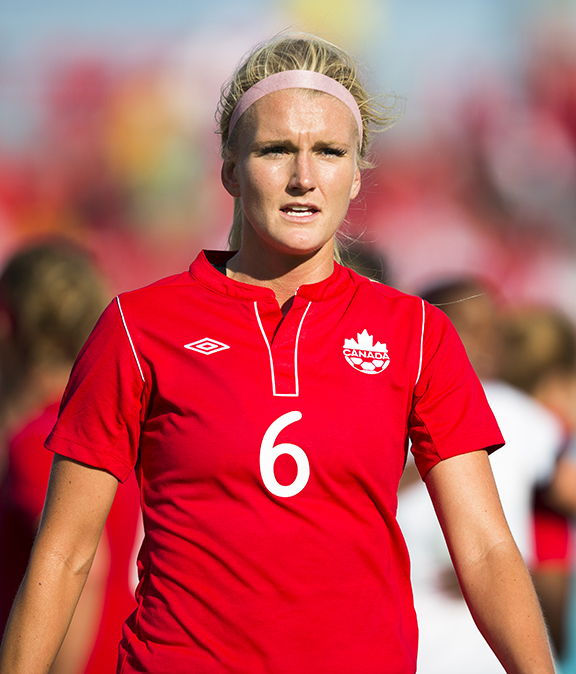 When Kyle received tickets to the 2002 Fédération Internationale de Football Association (FIFA) Under-19 Women’s World Cup she found her inspiration in watching the young Canadians play. Six years later, Kyle would count many of those same players as teammates on the national team.

Kyle would make 101 senior appearances for Canada in a standout international soccer career. The Saskatoon product made her debut in 2008 as a 19-year-old and quickly established herself as a mainstay in the Canadian midfield for a decade.

Kyle appeared in all three of Canada’s matches at the 2011 FIFA Women’s World Cup, starting the opening match against Germany in front of 73,680 people at the Olympic Stadium in Berlin. She then played in all five of Canada’s matches as they hosted the 2015 Women’s World Cup. Canada topped their group and won their first knockout match before losing to England 2-0 in the quarter-final.

After going winless at the 2011 World Cup, Canada changed managers and the program began to enter a golden age. They were underdogs heading to the 2012 London Olympics but advanced out of their group after rallying to draw 2-2 with Sweden. In the quarter-finals, they upset the hosts from Great Britain but lost in extra time in a controversial semifinal against the United States 4-3. Despite the disappointing and contentious loss, the Canadian team regrouped and won the bronze-medal match 1-0 over France thanks to a late goal. Kyle played in all six of Canada’s matches at the London Games.

Kyle was also a member of the 2011 Pan-American Games gold medalists in Guadalajara, Mexico. Canada went unbeaten through the tournament and Kyle scored one of Canada’s goals in a 2-1 win over Colombia in the semifinal. They defeated Brazil on penalty kicks to win the gold.

After spending one year with the University of Saskatchewan, Kyle moved to Vancouver at 18 to join the Vancouver Whitecaps program. She had two stints with the Whitecaps from 2006-08 and 2010-12 while she played one season in Sweden with Piteå IF. In 2013 she joined the National Women’s Soccer League (NWSL) in the United States, playing for Seattle Reign FC. She played 21 matches and scored three goals in Seattle. The next season she split her time with the Boston Breakers and Houston Dash before spending 2015 with Portland Thorns FC. In 2016 she played her final NWSL season with the Orlando Pride.

The next year she began a broadcast career that has taken her around the world working as an analyst, host, colour commentator, and sideline reporter for a number of outlets.