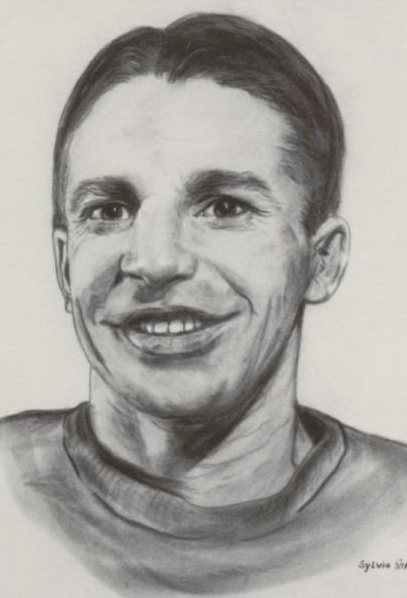 Doug Bentley played all over Saskatchewan during the start of his hockey career but began in his hometown, on the Delisle Tigers. Soon after that he moved on to play on the Saskatoon Wesley Juniors. Doug then played in Regina both as a junior and senior player. The next year, 1937, he joined the Moose Jaw Millers Senior Hockey team.

In 1938 he moved farther west, joining his four brothers as a member of the Drumheller Miners. The next season Doug advanced on to play in the National Hockey League (NHL) on the Chicago Black Hawks, where he would play his entire career from 1939 until 1954. Doug was a vital component of the “Pony Line”, along with his brother, Max and Bill Mosienko. This unstoppable trio was considered to be one of the All-Star units in hockey.

During his career with Chicago, Doug Bentley scored 219 goals and 324 assists in regular league play and an additional 9 goals and 8 assists in playoff competition. This prolific point getter won the league’s scoring title in 1942. Doug also was named to the first All-Star team in 1943 and was a member in both the 1943-44 and 1946-47 seasons. In the 1948-49 season he was selected to the second All-Star team.

Doug was inducted into the Hockey Hall of Fame in 1964, recognized for his outstanding career.