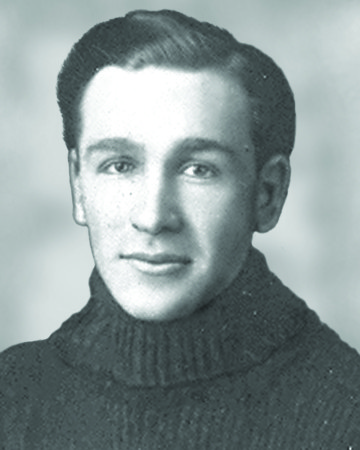 Edward Lyman “Hick” Abbott was known throughout Western Canada as a great athlete, a true sportsman and an exceptional person.  Even today, many sports historians consider Abbott one of Regina’s greatest athletes.

Originally born in Orillia, Ontario, Abbott moved to Regina at an early age and history was made. While in high school, Abbott excelled in a variety of sports including lacrosse, baseball, rugby, football, basketball and hockey.

Remembered across southern Saskatchewan as a speedy right winger who had a knack of putting the puck in the net, Abbott was at home on the hockey rink.

The talented Abbott continued to enjoy success on the ice.  He was a key member of the Regina Victorias when they became Senior Hockey Champions of Canada in 1913 and 1914 winning the Allan Cup.

Prior to enlisting in the military and heading overseas to fight in World War 1, Abbott piloted Regina to a western championship in rugby in 1915.

Abbott was also a true leader on the battlefield.  He was awarded the Military Cross and an extra Bar for his bravery and gallantry in the field before his untimely death in August, 1918.

Close family friend, Joe Potts, found a way to preserve Abbott’s memory and keep his name alive for generations to come by introducing the Abbott Cup for the Western Canadian Junior Hockey Championship.

Abbott was one of the finest athletes and best sportsmen in Regina. He will always be remembered as a true warrior and a man of character, both on the playing field and the battlefield.