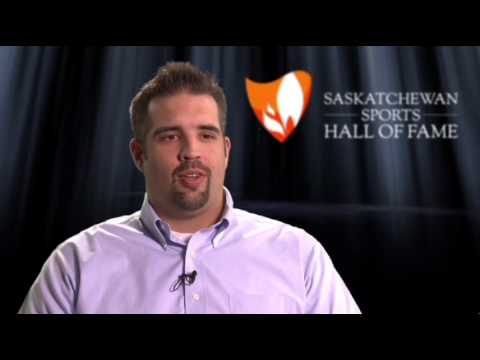 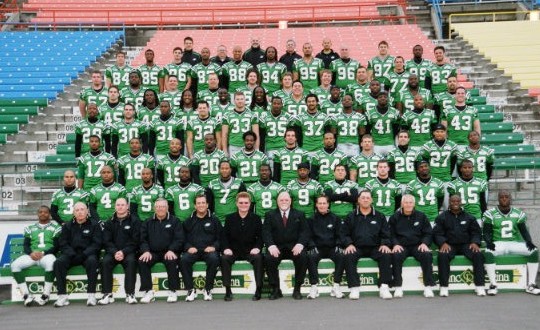 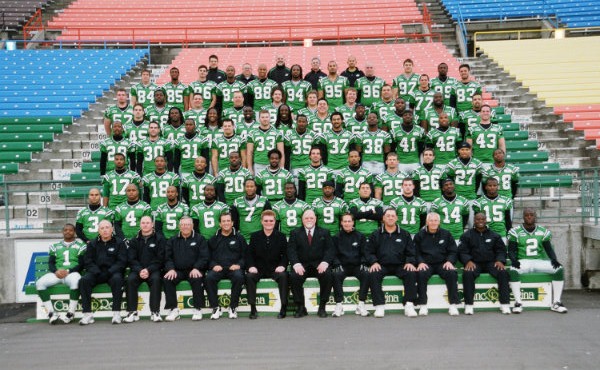 The Roughriders were Canadian Football Champions in 2007, only the third championship in the team’s long history.  Their victory in the 95th Grey Cup game was the culmination of a remarkable season.

Prior to the start of the season, the team hired Kent Austin as head coach.  It was Austin’s first opportunity to be the head coach of a Canadian Football League team.  It was also a return to the team he had won a championship with as a player in 1989.  Having had a taste of the playoffs in recent seasons, fans were hopeful that Austin could somehow get their team back to the big game.

Led by quarterback Kerry Joseph, the Riders won seven of their first nine games, their best start since 1976.  They finished the season with a record of twelve wins against six losses, good enough for second place in the West Division and their first home playoff game in 19 years.  Joseph, who led the team in both passing and rushing touchdowns, would go on to be named the league’s Most Outstanding Player at the end of the season.

In the west semi-final, the Roughriders held off a late charge by the Calgary Stampeders to win by a score of 26-24, their first home playoff win since 1976.  The west final found the team in Vancouver facing the B.C. Lions.  Receiver Andy Fantuz scored a touchdown just seven minutes into the game, and the team never trailed from that point on.

The Riders headed to Toronto, the site of the Grey Cup game, to face an old rival, the East Champion Winnipeg Blue Bombers.  It was the first time the two historic franchises would meet in a championship game.  Due to an injury to their all-star quarterback Kevin Glenn, the Bombers were forced to play Ryan Dinwiddie, a rookie with little CFL experience.  However, the score remained close for most of the game.  With just under three minutes to play and down by only four points, the Blue Bombers were driving down the field.  But an interception by the Roughriders’ James Johnson sealed the victory for the Green and White, 23-19.   It was Johnson’s third interception of the day, a Grey Cup record, and he was named the game’s Most Valuable Player for his efforts.  Teammate Fantuz was named outstanding Canadian thanks to his four receptions for 70 yards and one touchdown, the only touchdown scored by the Roughriders’ offense in the entire game.

Kent Austin was named the CFL’s Coach of the Year for his part in leading the team to a championship season.