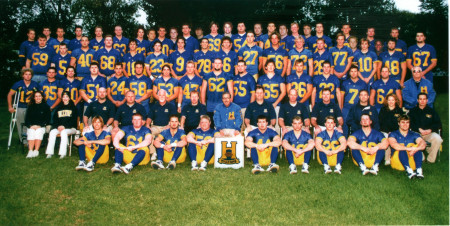 The Hilltops 2003 season was special as they finished the year undefeated. After leading the Prairie Football Conference with an 8-0 record, the Hilltops defeated the Edmonton Wildcats in the league semi final and the Edmonton Huskies in the final for the third consecutive year.

The St. Leonard Cougars were the Hilltops next playoff victim in the national semi final.  Saskatoon then dominated the Victoria Rebels in the Canadian Bowl in Chilliwack. With an overwhelming 59-0 win, Saskatoon became only the fourth team in Canadian junior football history to win three consecutive national championships. In addition to being crowned National Champions, Hilltop stars Bret Thompson, offensive MVP, and Tyler Baier, defensive MVP, were honoured for their play.