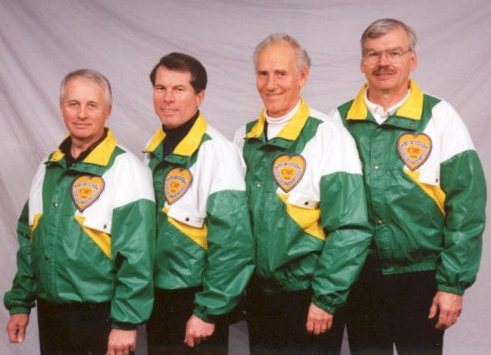 The rink had won the Labatt’s Tankard in 1984 and went on to the Canadian Brier as the Saskatchewan representative where they placed third with seven wins and four losses. After turning to the senior competition, they curled for a 7 and 0 record in the round robin at the SaskTel Mobility Cup Senior Men’s Provincial Championship. The Bryden foursome met Al Kehler Rink in the final and managed an extra-end win to become the Saskatchewan Senior Champions.

The Canadian championships were played in Sault Ste. Marie where they posted a 9-2 record in the round robin and then went on to defeat Manitoba’s Clare De Blonde’s rink 8-7 to capture the 1998 Canadian Senior Curling Championship.

The team’s record is highlighted by the fact that they played together as a team for twenty-one years in both men’s and senior men’s competitions at the national level. The team returned to the national final again in 2000 where they placed 4th with a 7 and 4 record.

Installed in the Saskatchewan Sports Hall of Fame, June 2006.