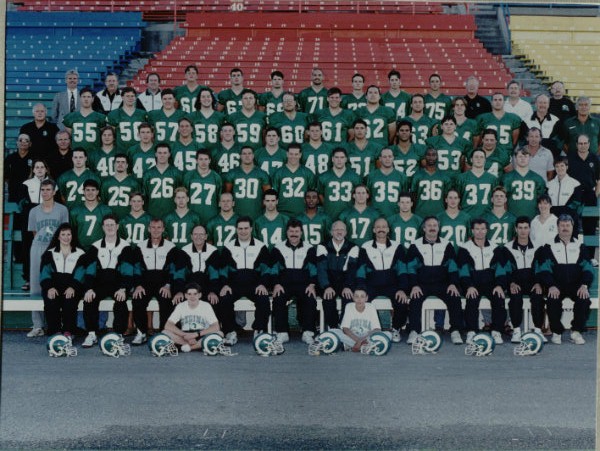 Some people consider the number 13 bad luck. In 1995, it was a number the Regina Rams Football Club eagerly embraced. On the strength of Canadian junior football titles the previous two years, the Rams were chasing their 13th national championship in franchise history.

The tradition continued in 1995 for the Rams, outscoring the opposition 153-30 en route to three victories early in the Prairie Football Conference season. Behind a strong running game, the Rams defeated the Calgary Colts 57-10 in the opener. They followed that up with a 57-6 win over the Edmonton Wildcats and a 39-14 victory over the Edmonton Huskies. Following a bye week, Regina fell from the ranks of the undefeated with a 33-20 loss to the host Saskatoon Hilltops, but came back the following week with a 51-14 win over Calgary. The Rams improved to 6-1 by shutting out the Wildcats 52-0 and defeating the Huskies 51-17. In between, they cruised to a 91-7 exhibition victory over the Winnipeg Hawkeyes. Avenging their lone loss of the season, Regina came from behind to record a 55-35 victory over the Hilltops in the final game of the regular season.

After defeating Calgary 49-16 in one semifinal, the Rams and Hilltops met again in the conference final. With a 19-8 victory, Regina won for the fourth straight season. Advancing to the Canadian Junior Football League’s Western Canadian final, the Rams edged the Okanagan Sun 11-8. They secured their 13th Canadian title and third straight national championship with a 26-10 victory over the Ottawa Sooners.