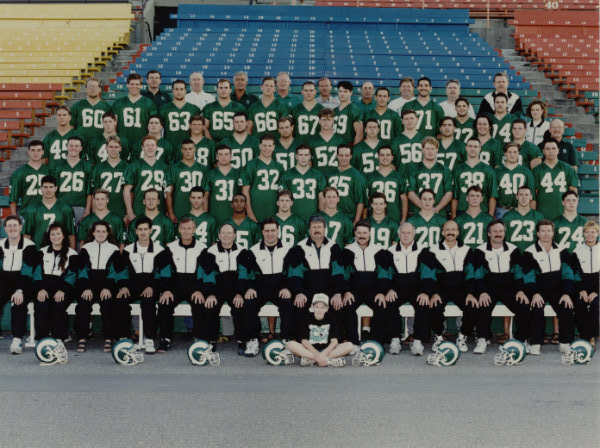 After coming off of their success as the 1993 Canadian Junior Football Champions, the 1994 Regina Rams were keen to collect their 12th national championship.

In 1994, the Rams continued their winning streak by outscoring the opposition 245-128 en route to four victories early in the Prairie Football Conference season. The Rams shutout the Edmonton Huskies 41-0 in the opening game. They followed that up with a 30-10 win over the Edmonton Wildcats, a 21-7 and a 39-9 victory over the Calgary Colts. The Rams fell from the ranks of the undefeated with a 16-12 loss to the host Saskatoon Hilltops, but came back the following week with a 41-21 win over the Wildcats. The Rams improved their win-loss record to 6-1 by winning against the Huskies 37-17 and defeating the Hilltops 24-9 in the final game of the regular season.

After defeating the Wildcats 28-3 in one semifinal, the Rams and Hilltops met again in the conference final. With a 34-7 victory, Regina won for the third straight season. Advancing to the Canadian Junior Football League’s Western Canadian final, the Rams edged the Surrey Rams 64-3. They secured their 12th Canadian title and second straight national championship with a 52-6 victory over the St. Leonard Cougars.