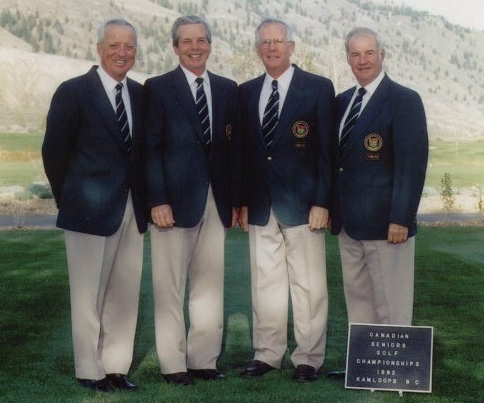 The 1992 Saskatchewan Senior Men’s golf team composed of Ray Marsh (captain), Fred Clark, Ron Whiteside (all from Saskatoon), and Ron Corrins from Swift Current was the first team from Saskatchewan in the thirty-year history of Senior golf to win the Phil Farley Trophy which is emblematic of Canadian Senior Interprovincial Team Matches Championships.

The team was chosen to represent the province during three days of competition at the Saskatchewan Senior Championships that were held in Lloydminster. This was followed by two more days of team competition at Saskatoon’s Holiday Park Golf course where the final team selection was made.

The Canadian Championships were held at the Rivershore and Eagle Point Golf Clubs in Kamloops, British Columbia. The format of the team championship allowed the teams to use the best three scores of the four each day to go to the team total.

The team, which was led by Ron Corrins with the low medalist rounds of 81 and 70, fell behind after the first day of the two-day competition. When the final rounds were completed, the team scored a team total of 472, which overcame a four-stroke deficit they had after the first day’s rounds were finished.  Ontario finished in second-place with a 476 total followed by B.C. (479), Quebec (482) and four-time defending champion Alberta (484).  Along with Corrins’ sparkling 151 score, Marsh had a 160 total, followed by Clark at 161 and Whiteside at 168.

Installed in the Saskatchewan Sports Hall of Fame on June 15, 2002.