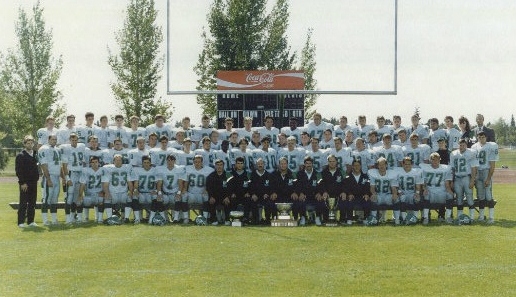 The 1990 University of Saskatchewan Huskies football team became the first football team in that university’s long involvement to win the Canadian Interuniversity Athletic Union (CIAU) championship. Their 24-21 victory over St. Mary’s University in the Vanier Cup helped to overcome the disappointment of losing the 1989 championship.

The Huskies finished the Canada West season with a record of 6 wins and two losses. They met the University of British Columbia Thunderbirds in the Canada West final and captured the Hardy Cup with a 24-9 triumph. Their next match-up was against the Quebec representative, Bishop’s University in the Churchill Bowl. They easily dispatched an overmatched Gaiters team, 41-13 to qualify for the Vanier Cup.

The Vanier cup was a close battle with Saskatchewan jumping out to an early 14-0 lead. St. Mary’s battled back in the 4th quarter to close the gap to the final 24-21 score. St. Mary’s almost came back in a last minute drive only to have the ball knocked loose by Don Bristow and recovered by Rob Dutton in a great defensive play that sealed St. Mary’s fate.

Of the 77 players on the Huskies, 76 were born in Saskatchewan. Head Coach Brian Towriss was named Canada West Coach of the Year. The team produced one First Team All-Canadian linebacker in Kim Pasloski, and two Second Team All-Canadians in defensive lineman Scott Hundseth and defensive back Jason Huel. As well, nine players were named to the 1990 Canada West All-Star Team. Four of the players, Dan Farthing, Duane Dmytryshyn, Errol Brown, and Ray Wiens, went on to play in the Canadian Football League.

Huskie quarterback, David Earl was named Most Valuable Player in both the Churchill Bowl and the Vanier Cup.