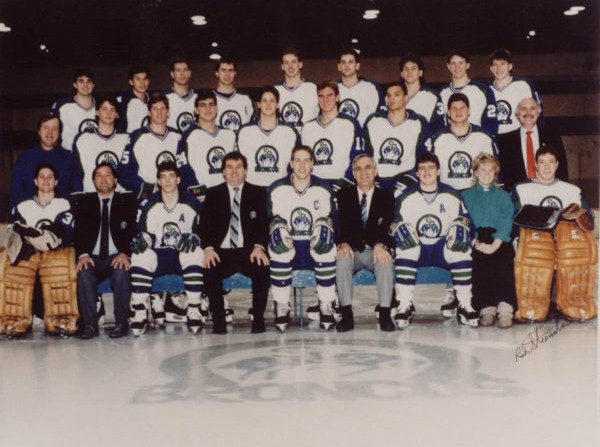 To cap off their remarkable season in 1988-89, the Swift Current Broncos captured the Memorial Cup, a symbol of junior hockey supremacy in Canada.

The Swift Current Broncos were first “out of the chute” during the 1988-89 hockey season, setting a club record with 12 consecutive wins to start the season, second best in the Western Hockey League (WHL) history. The Broncos remained in first place in the WHL for the entire season and were ranked #1 in the Canadian Hockey League (CHL) for sixteen consecutive weeks. The Broncos finished the season with 111 points, 25 more than their nearest competitor.

The 1988-89 edition of the Broncos set WHL records for the fastest three goals in a game (16 seconds) and most power-play goals (180), and Darren Kruger set a league record with 63 power-play assists. This is quite a list of accomplishments for a team that was formed three short years before, after the franchise returned to Swift Current.

During the WHL playoffs, the Swift Current Broncos tied a league record with 12 consecutive playoff victories to win the East Division Championship and then capture the Athol Murray Memorial Trophy awarded to the WHL champions.

The Broncos then advanced to the Memorial Cup Tournament where they met the Peterborough Pete’s, Laval Titans and Saskatoon Blades in the round robin competition. They lost only once in the event and met the Blades in an all-Saskatchewan final. The Broncos defeated the host Blades 4-3 to win the Memorial Cup.

The 1988-89 Swift current Broncos was a team that contained several extremely talented individuals. Six Broncos played in the WHL All-Star game that year. Captain Dan Lambert was named the top defencemen in the WHL, selected to the WHL first All-Star team and voted MVP in the Memorial Cup. Tim Tisdale and Sheldon Kennedy were selected to the WHL second All-Star team and Tisdale was nominated as the Eastern Division Most Valuable Player in the WHL.

Installed in the Saskatchewan Sports Hall of Fame and Museum on June 18, 1994.