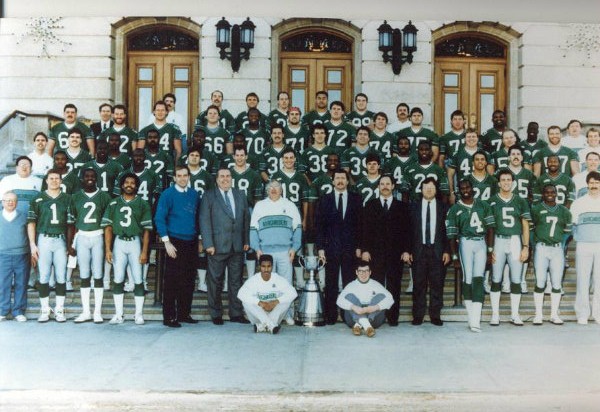 The “greatest fans in the world” had waited a long time for November 26, 1989. After winning their first Grey Cup in 1966 (also on November 26), the Saskatchewan Roughriders had been back to the final four times (1967, 1969, 1972, and 1976), but always came up short in the “big game”. They lost to Hamilton in 1972 on a last second field goal and to Ottawa in 1976 on a touchdown catch by Tony Gabriel in the dying moments. Fans stayed faithful to the team through 11 consecutive years (1977-1987) of “playoff-less” football. 1989 was another tough year in which the “Riders overcame adversity” time and time again to make the playoffs with a 9-9 record and a 3rd place finish. Few game them much of a chance.

The “Green and White” defeated Calgary in the western semi-final on November 2, thanks in part to an amazing 50-yard romp by Brian Walling on a draw play with 1:38 remaining in the game. Next in line were the Edmonton Eskimos who predicted a “cake walk” against the underdog Riders. But November 19 would also be the Riders day, as Tom Burgess came in for the injured Kent Austin to orchestrate a decisive 32-21 victory and sent Saskatchewan to the final at Skydome in Toronto.

The Grey Cup final on November 26, 1989 has been called one of the most exciting games ever played. After spotting the Hamilton Tiger-Cats a five-point lead at halftime, the Roughriders fought to take the lead in the 3rd quarter. With 44 seconds to play in the game, Tony Champion scored for Hamilton to make the score 40-40. Starting on the Riders’ 36-yard line, Austin marched the team down the field and into Dave Ridgway field goal range. With two seconds remaining on the clock, Glen Suitor held the ball on the 35-yard line and Ridgeway kicked it through to give Saskatchewan the win; 43-40.

Impromptu parades in the cities and towns throughout Saskatchewan released 23 years of pent-up emotion for the Saskatchewan Roughrider fans. It was truly a provincial victory.

Installed into the Saskatchewan Sports Hall of Fame on June 17, 1995.