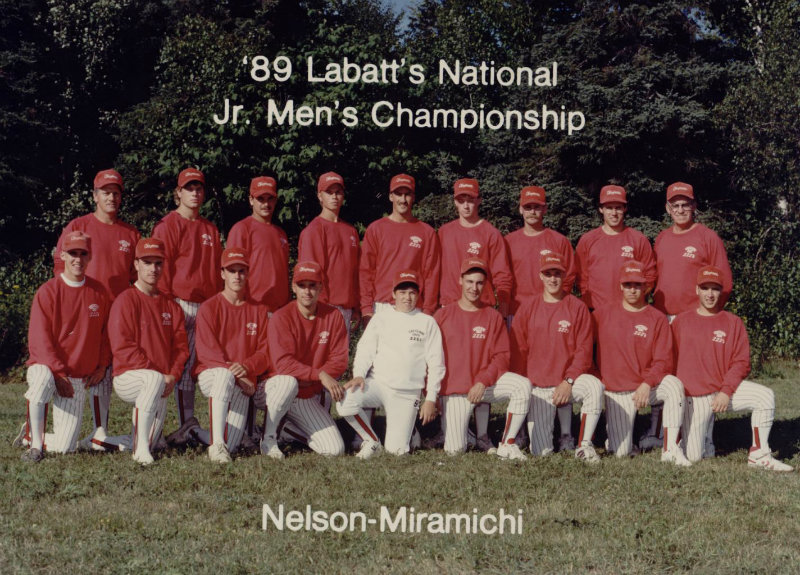 The provincial tournament in 1989 saw the 222’s face the best junior teams in Saskatchewan.  They easily defeated the Regina Fighting Saints in their opener, 10-1.  They then triumphed over Saskatoon Timberlane who had been the 222’s nemesis in the past two seasons.  In the final, they defeated the Langham Merchants to claim the 1989 provincial championships.

In 1989, the Canadian Junior Championships took place in New Brunswick in the same ball park where they had won the 1986 Midget national Championships.  The people of Melfort really rallied behind their team and were instrumental in raising the funds to send the team to the nationals.  Fundraising included pancake breakfasts and bottle drives as well as major donations from the Melfort Credit Union and the Melfort Rotary Club.

In the round robin portion of the championships, the team finished in first place in their pool with a 4-1 record.  After jumping onto an early 6-0 lead against Ontario in their first game, they went on to give up seven straight runs in a losing cause.  Their next four games against New Brunswick, Newfoundland, British Columbia, and Manitoba resulted in convincing victories.  By placing first in their pool, the Melfort crew was given a “double life”.  That is they had to lose twice to be eliminated.  The 222’s met and defeated Prince Edward Island in the first playoff game with a dramatic come-from-behind victory with a lead off, first pitch homerun in the seventh inning.

The championship match saw Ontario qualify in the playoffs.  This meant that the Saskatchewan team was given an opportunity to avenge their only loss in the championships.  As well, because of the “double-life” feature of the championships, Ontario was going to have to beat the Saskatchewan team twice.  Ontario managed a close victory in the first game when it looked like Melfort might score an in-the-park homerun only to have their batter thrown out at home.  The extra innings game saw Ontario win with a passed ball in the ninth inning.  The 222’s did not squander their advantage and in the second game, defeated a stubborn Ontario squad 2-0 to win the championship.

Coach Doug Holoien was named as Coach of the Year by Softball Saskatchewan and Softball Canada for his effort with the team.