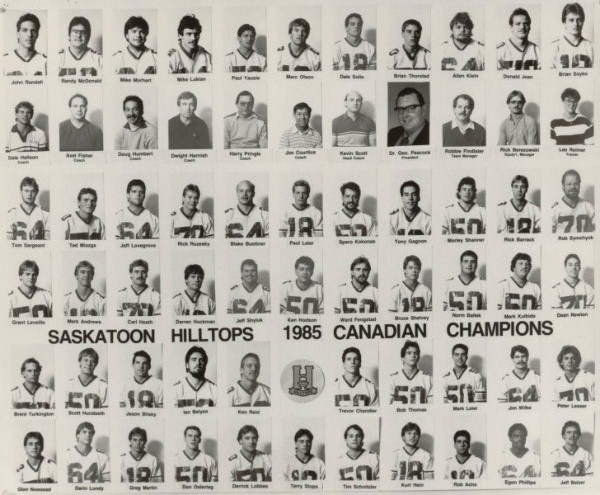 The motto of the 1985 Saskatoon Hilltop Football team was often described by the media as “They bent, but they didn’t break.” The team received this inscription during the regular Prairie Junior Football Conference schedule when they recorded a five win and three loss record. During the early part of the season injuries to several key players hampered the progress of the team and at times the Hilltops were not looked upon as a strong contender. In due course, the injured players returned, the remaining members used the experience they learned with each passing game and the team played as a unit. The end result saw the 1985 Saskatoo Hilltops emerge as the recipients of the Armadale Cup, the symbol of the Canadian Junior Football supremacy.

The 1985 version of the Saskatoon Hilltops was a mixture of experienced veterans and raw rookies. They were urged by their head coach Kevin Scott to play to the best of their avility and to learn from their mistakes. If each player could be satisfied that these two goals were personally achieved, then win or lose, they could be proud of themselves.

The final roster was composed of players from various areas around our province. Representation included from Canora, Hudson Bay, Outlook, North Battleford, Lloydminster, Moose Jaw, Regina and Saskatoon. They ranged in age from 18 to 22 and were a close knit team. Besides playing football together they also decided to become actively involved in community affairs. During the season they worked with various associations, for the disabled, made presentations at several public and high schools in Saskatoon and the surrounding areas and also participated in other community projects.

In the second half of the schedule, the Hilltops won three games, 42-18 over Calgary, 47-25 over the Wildcats and 31-13 over the Huskies before being defeated once again by the Rams 38-32. The schedule ended with the Hilltops in second place with a 5-3 win-loss record.