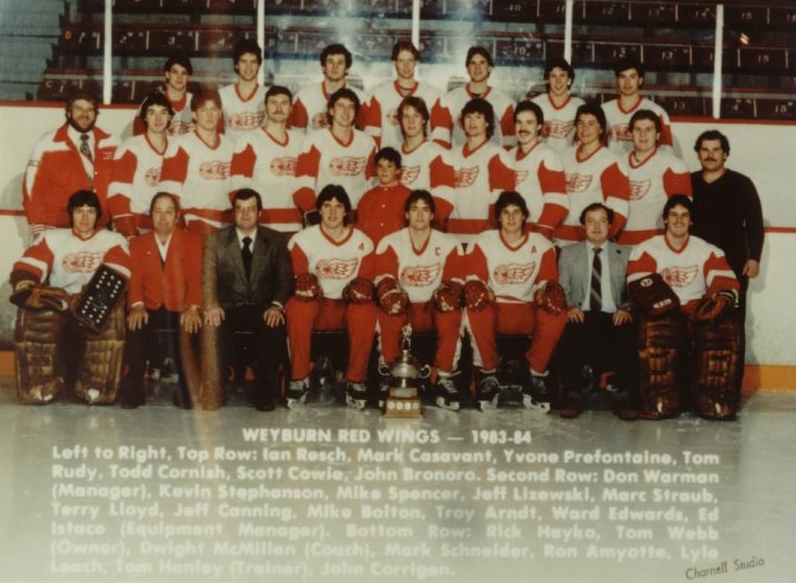 1983-84 was a season to remember for the Weyburn Red Wings Junior “A” Hockey Club. Having last competed for a national championship in 1970, the roller coaster ride of the 1983/84 playoffs was a wonderful experience for Weyburn residents and all fans of hockey.

After a very successful season the Red Wings finished second in the league standings. In the provincial championship the Red Wings defeated the Yorkton Terries and then met the Selkirk Steelers for the Saskatchewan-Manitoba championship. The series was tied at two games apiece before Weyburn took control, winning games five and six for the regional championship. The Red Wings met the Langley Eagles in the Western Canada championship. Weyburn overwhelmed the B.C. squad as they were swept in four straight games. The Red Wings were now set to battle for the national Junior “A” title and Weyburn was buzzing with excitement. City council even got into the spirit, officially declaring May 5-13, “Centennial Cup Week”.

Weyburn met the Orillia Travelways from Ontario for the national title. After losing game one, Weyburn answered with wins in game two and three. In a series between two evenly matched clubs, Orillia stole game four with a 2-1 victory and then took control with an 8-5 win in game five. Facing elimination, Weyburn put in a spirited effort to win game six and set up a “winner takes all” game seven.

Almost 2,400 spectators packed the Weyburn Coliseum that May night in 1984 to witness a strong performance by all members of the Red Wings as they skated off with a 3-0 victory and the Centennial Cup. Captain Ron Amyotte scored his ninth power play goal in the series and was named Centennial Cup’s Most Valuable Player. John Corrigan stopped 22 shots for the shutout and was helped by a great defense, including John Brunoro who blocked a Travelways shot in the third period that was destined for an empty net.

The victory not only brought attention to the young men on the team and the city of Weyburn, it also unified a city that drew together to cheer its junior hockey team to their first national title.

Installed in the Saskatchewan Sports Hall of Fame on June 17, 1995.