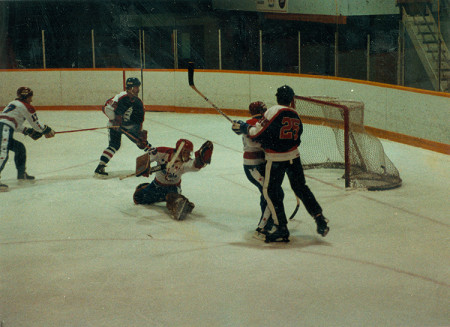 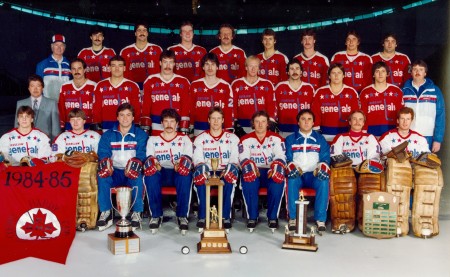 One could say the 1984/85 Moose Jaw Generals were destined for greatness and a place in Canadian hockey history. When the puck dropped to start the South Central Senior Hockey League regular season, fans could see this was going to be an unbelievable season for the Generals.

Under the guidance of head coach Jim Hrycuik, the Moose Jaw Generals finished the regular season in first place with an unblemished 24-0 record. The Generals were rewarded for their efforts as Kevin Moore, Jim Misener, Darren Bobyck, Bob Parker, Brian Russell and Kevin Evans were named to the all-star team. Misener also led the league in scoring while Moore was selected as the league’s top defenceman.

Moose Jaw hit the playoffs in full stride handily defeating the Weyburn Devils in the semi-final before moving on to the league finals against the Milestone Flyers. The result was a Generals four game sweep and a berth in the Provincial Championships.

In the Provincial semi-final, the Moose Jaw Generals skated past the Regina Bruins to move into the best of five league final against the Lloydminster Border Kings. Heading into the final series the Generals sported an incredible 34 game winning streak.   The battle for Provincial hockey supremacy would provide the Generals with their toughest challenge of the season. It was a classic series that went down to the fifth and deciding game, which the Generals won 8-3.

Moose Jaw hosted the Journal Cup Final against British Columbia’s visiting Quesnel Kangaroos. The Generals claimed the Western Canadian hockey crown with another series sweep and a chance to play for the Hardy Cup, the Canadian National Senior Championship.

Once again Moose Jaw was the host and they faced-off against a very familiar opponent, the Prince Edward Island, Charlottetown Islanders. Charlottetown, the Eastern Canadian Champions, had defeated Moose Jaw in the 1983/84 Hardy Cup Finals.

The re-match was on but the result was very different. Led by Hardy Cup MVP Carl Van Camp, the Moose Jaw Generals capped off their remarkable 45-2 record season with a four-game sweep and the Hardy Cup National Title in front of their hometown fans.

Installed in the Saskatchewan Sports Hall of Fame on June 13, 2015.