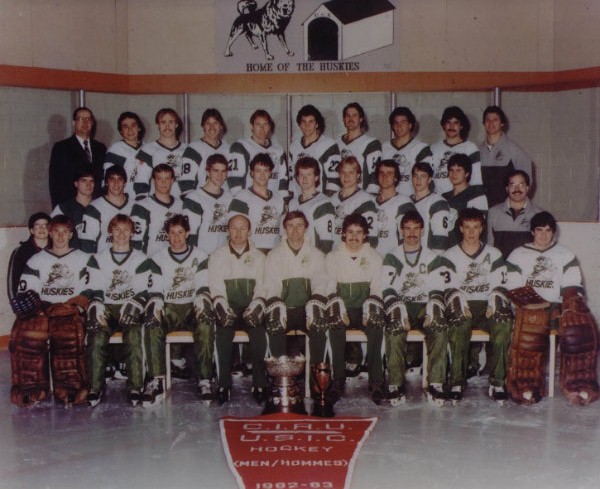 The 1982-83 season was the culmination of a three year effort to capture the Men’s Hockey Canadian Interuniversity Athletic Union (C.I.A.U) Championship. The Huskies had lost the championship the previous two years to the University of Moncton by 4-2 in 1981 and 3-2 in 1982.

Coach Dave King, in his final year at Saskatchewan, led the team to the Canada West University Athletic Association (C.W.U.A.A) championship and then to the national championships hosted by the University of Moncton. The Huskies qualified for the final by defeating Brandon University 6-2 and then overwhelming Wilfred Laurier 10-1. In the final, led by Willie Desjardins who was recognized as the tournament’s Most Valuable Player, they defeated Concordia University 6-2.

Most of the team members still live in Saskatchewan and many have contributed to their sport as coaches and administrators. Coach Dave King received Coach of the Year honours in the C.W.U.A.A. for 1983 and the team placed 7 members on the two All-Star teams for the Western Conference.

The team was previously inducted into the Saskatoon Sports Hall of Fame and the University of Saskatchewan Wall of Fame.