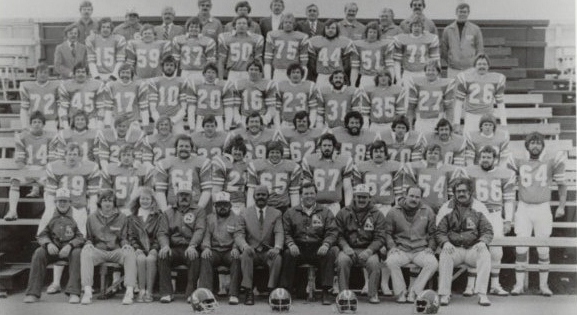 Although the nucleus of the 1981 team remained the same as the successful 1980 team, the expectations were different. The Rams were expected to win – and win they did!

The Rams went undefeated the entire season placing first in the Prairie Junior Football Conference with a record of 10-0 with 492 points for and only 101 against.

This winning streak continued with playoff wins against the Edmonton Huskies (20-18) in the PJFC semifinal and the Saskatoon Hilltops (29-0) in the final winning the Paul Schwann Memorial trophy for the second year in a row.

They then went on to the Canadian Junior Football League (CJFL) west semifinal against the Vancouver Meralomas (59-22) and the final against the Winnipeg Hawkeyes (30-20) to capture the Gillespie Trophy and advance to the National final.

In the final they faced the Hamilton Hurricanes again, this time in Ivor Wynne Stadium in Hamilton. The Hamilton team, also unbeaten all season was leading the Rams at halftime. But the Rams rallied in the second half and defeated the Hurricanes by a convincing margin of 46-24. It was win number fifteen and capped an undefeated season by winning their second straight Armadale Cup.