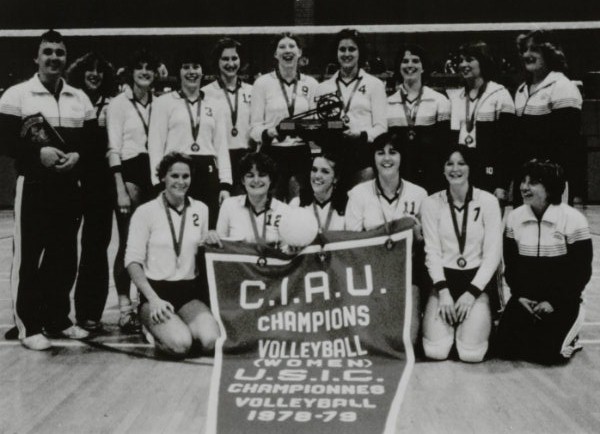 The Huskiette women’s volleyball team made history when they won the Canadian Interuniversity Athletic Union (CIAU) national volleyball championship in 1979. With this victory the volleyball Huskiettes became the first University of Saskatchewan varsity team ever, after seventy years of men’s and women’s sports, to capture a national crown.

Throughout the season the Huskiettes consistently finished near the top in tournaments throughout Western Canada and North Western U.S.A. The CIAU tournament was conducted in a round robin format. The University of Saskatchewan and York University survived to reach the finals, which the Huskiettes won in four games.

The Huskiette achievement in 1979 was matched by the 1978-79 University of Saskatchewan Huskies Volleyball team who also won the CIAU national Championship. Not only was it the first national championship for both teams, but it marked the first time in the history of any Canadian intercollegiate sport that the same university won both the Women’s and Men’s titles in the same year.

The success of the Huskiette program spoke highly of high school coaches throughout the province who helped establish the fundamental skills and values in the athletes, as players represented all parts of Saskatchewan. The Huskiettes also benefited from the Saskatchewan Volleyball Association concept of a provincial team.