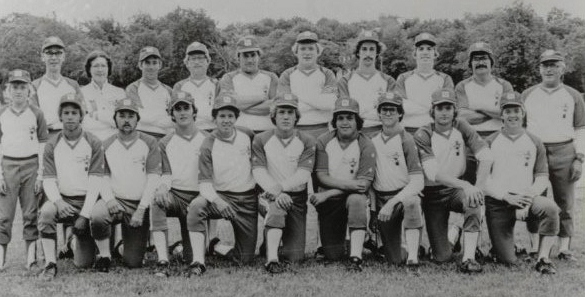 Consisting of mostly 16 year olds in 1975, the Imperials entered the Saskatoon Amateur Men’s Softball Association and captured the league’s fourth division championship.  The following season, they moved up to the league’s first division and in 1977 won the division playoff.  At that time, the Imperials qualified to play in Saskatoon’s special men’s division – the city’s best league.

During those years, the Imperials still participated in junior level competition.  They beat out the Saskatoon Playboys to win a spot as zone six representatives at the 1976 Saskatchewan Summer Games in Swift Current and in 1977 took the junior provincial title in Weyburn.  While the team missed the medal round, its members gained valuable experience for the following year’s national championship.

The Imperial 400’s banner year came in 1978.  In provincial play, they maintained a perfect record and beat out Maymount for the provincial championship.  The Imperials went on to represent Saskatchewan at the Canadian Junior Men’s Fast Pitch Softball Championships in St. John’s Newfoundland.  From their previous experience at nationals, the team members knew a tournament victory would not come easy.  They won their first outing against the North West Territories, but then lost against Ontario with Ontario’s best pitcher, Jim Cowdrey, at the helm.  Next, the Imperials won 9-4 by out hitting the offensive minded New Brunswick team.  Then they defeated Quebec 4-0.  In the “A” final, the Imperials rallied to defeat Ontario and capture a berth in the championship series against St. John’s.  Saskatchewan only had to win one game in that series; the Imperials lost their first game 3-1, but Graham Mazurek contributed three hits in the second to help Saskatchewan win 6-4.  The Saskatoon Imperial 400’s had reached their goal.  They were the 1978 Canadian Junior Fastball Champions.