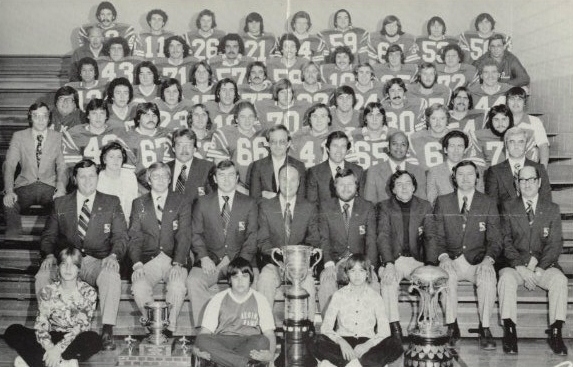 The goal of 1976 was to make it one to remember for head coach, Gordon Currie, as it would be his last season with the Rams after ten successful years with the program.

The Manitoba-Saskatchewan League disintegrated after the 1975 season leaving the Regina Rams and Saskatoon Hilltops to join the Alberta Junior Football League. This league, renamed to the Prairie Junior Football Conference after the addition of the Saskatchewan teams proved to be much more competitive.

Finishing the league in second place with a record of 7-1 behind the Edmonton Wildcats, the Rams were eager to show their dominance in the playoffs. In the league semifinal they trampled the Calgary Mohawks 47-0. In the final the Rams were unstoppable against the Edmonton Wildcats, winning 62-28 to clinch the first ever Prairie Junior Football Conference title and the Dr. Paul Schwann Trophy.

The Rams met the Vancouver Meralomas at their home field for the Western final. In front of the home crowd the Rams blanked the Meralomas, 45-0 to advance on to the Canadian championship final.

The Rams also had home field advantage for the Canadian championship game against the Hamilton Hurricanes. As it was Currie’s last game an astonishing 10,000 fans came to Taylor Field to cheer on the Rams and watch the championship game. The Rams started off strong but fell behind and by the end of the third quarter the Hurricanes lead 20-15. Desperate for a win to end off Currie’s career the Ram’s came back in the fourth quarter more determined than ever. With quarterback, Len Knoll completing 11 out of 13 passes in the fourth quarter and the rigidity of the Regina defence, the final score was 45-23 in favour of the Rams. It was the Rams’ second consecutive Canadian Junior Football championship.

Gordon Currie capped off his career with the Rams by winning his sixth Canadian championship and securing a record of 109 wins out of 136 games. Gordon Currie was individually inducted into the Saskatchewan Sports Hall of Fame and the Canadian Football Hall of Fame in 1978 and 2005 respectively.

Installed in the Saskatchewan Sports Hall of Fame in 1982.