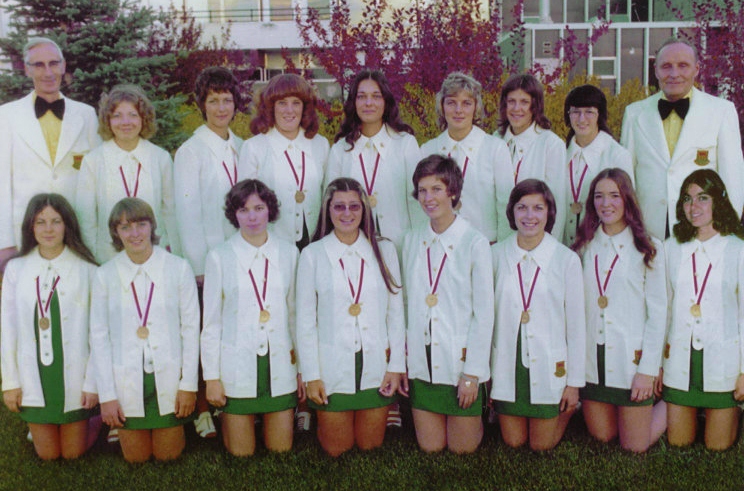 In 1972, a group of young female softball players came together under the guidance of Frank O’Donnell and Andy Messner and achieved immediate success by winning the Women’s Division II Championship in the Saskatoon Softball League and finishing first in the inaugural Saskatchewan Games and the 1972 Junior Provincial Championship.

The Blue Angles qualified as the Saskatchewan representative for the 1973 Canada Summer Games being held in Burnaby, British Columbia.  The Angles were the only team at these championships that was made up of players from only one team – all the other provinces had selected all-star teams or teams bolstered with pick-ups from other teams in their province to represent them.

The tournament consisted of two pools of teams with the first and second place finishers from each pool moving on to the medal round.  The Saskatoon team finished with a 3-2 record in their pool, which was good enough for second place.  In their semi-final game against Alberta, the Blue Angels managed to triumph by a 7-5 score.  They met the host team from British Columbia in the gold medal match.  Following a Marvel O’Donnell walk, a single by Carol Bertsch, a couple of run-scoring singles by Carol Rayburn and Pat Harrison in the sixth inning, the Blue Angels scored a 6-4 triumph and became the winners of the women’s softball gold medal at the 1973 Canada Summer Games.