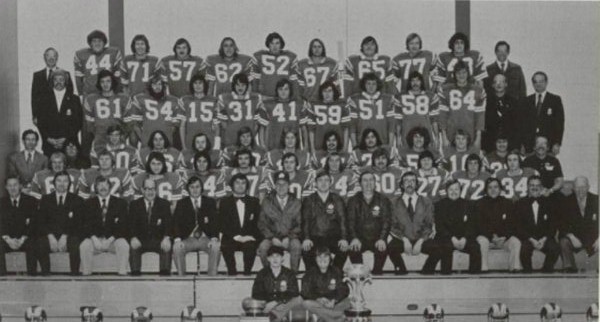 The 1973 Regina Rams Football team was a group of 32 young men and four coaches who believed they couldn’t be beat and weren’t.

During the regular season, the Rams compiled a 6 win, one tie record to achieve first place in the Man- Sask Junior Football League.  After defeating the Saskatoon Hilltops in the two-game total points league Championships with a convincing 88-42 margin, the Rams were ready for the Canadian Championships.

Once again the Rams hosted the Vancouver Meralomas in the Western semi-final.   In a close game the Rams prevailed and won by the score of 30 – 28.

In the Western final the Currie-coached team reached deep and came up with a 19-17 victory over the Edmonton Huskies.  Another close game and hard won victory to win the West.

The Rams then travelled to Ottawa to play the powerful Sooner Football Club.  Although they had lost their starting quarterback in the Western semi-final and another quarterback in the first nine minutes of the game, the Rams went on to victory with a defensive back playing quarterback.  The final score was a shutout 9-0 and took a powerful performance from their defense to win.  It was a game that will long be remembered.

Club President Jerry Joynt and Coaches Gordon Currie, Mel Flissel, Al Relkey and Don Schmidt had to be very proud of this courageous effort by the Rams. After having a season of 11 wins and one tie, the Regina Rams well-deserved the National Junior Championship in 1973.