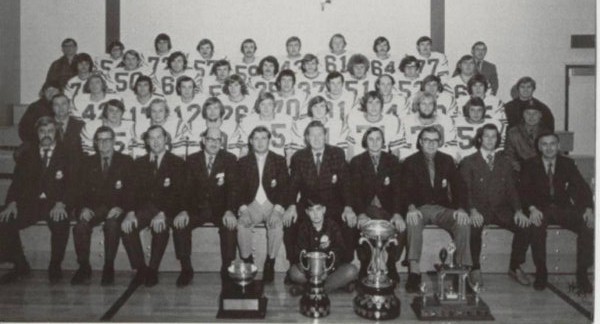 In 1971, the Rams went through the regular schedule with a perfect 8-0 record, only the third time a team had recorded a perfect season in the 19 year history of the Man-Sask Football league and the first time in eight years it had been accomplished. The Rams defeated the Winnipeg Hawkeyes 72-31 in the league 2 game total point final series advancing to the league Semi-final where they would once again meet the Edmonton Huskies.

In the Semi-final against the Huskies, on home turf at Taylor Field, the Rams won handily 48-7.  The final took them to Vancouver to once again met the Vancouver Meralomas.  It poured rain and the Rams fumbled 11 times, turning the ball over on 4 occasions.  Despite this, they were victorious 34-12.

On November 13, 1971 the Rams would go on the road to Ivor Wynne Stadium in Hamilton to once again meet the Burlington Braves in the National final.   It seemed not to matter where the Rams played, they were just too good and won the National title for a second successive year, 42-13 over the Braves.

During regular season play in 1970 and 1971 the Rams amassed a total of 572 points, an average of 36 points per game, while giving up a total of 147 points or an average of nine points per game. The Rams, since 1965, have been under the direction of head coach Gord Currie. In 1970 and 1971, the assistant coaching staff included AIf Rekey, Doug Killoh and Former Rams, Mel Fiissel, who played on the 1966 championship team and Don Schmidt, a member of the 1970 squad.