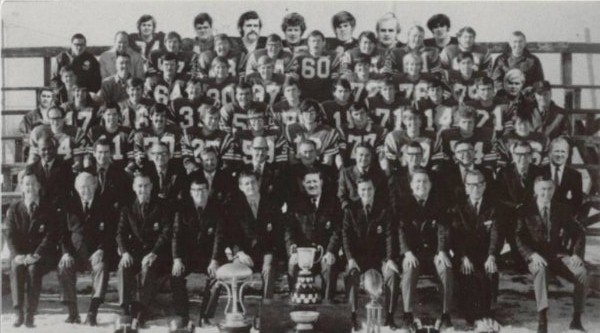 In 1970 the Rams fashioned a 6-2 league record, finishing in second place in the Manitoba-Saskatchewan Junior football League. They defeated the Winnipeg Hawkeyes in the league final with a close high scoring battle 47-46, two game total point final series.  This would be their toughest battle on the road to the National Championship.

They then went on to defeat Vancouver Meralomas in the Western Canada semi-final with a score of 49-21 and the Edmonton Huskies 29-11 in the Western final.

This sent them to the National final, November 11th, on their home turf of Taylor Field against the Burlington Braves.  The Rams did not know what to expect from the Braves but knew it would be a tough battle as the team was undefeated and had amassed an amazing 78 touchdowns.  At the half, Coach Gordon Currie gave one of his inspiration speeches and the team was off and running.  They won the game by a 39-8 margin in one of the most lopsided games for the Leader-Post Trophy and a Canadian championship.

In 1970, 10 rams were selected to the Man-Sask All-star offensive and defensive team.