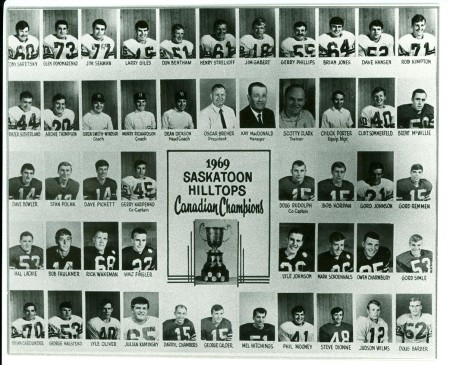 In 1969 the Saskatoon Hilltops set off to win their second consecutive Canadian Junior Football championship. The team had lost a lot of their players from the winning ’68 team along with their coach who was replaced by Dean Dickson but that did not stop the Hilltops.

After an evenly matched regular season the Hilltops met their biggest rivals, the Regina Rams in the Manitoba-Saskatchewan league final in a two game total point series. The Hilltops did not have a good start, losing to the Rams 7-3 in the first game. The Hilltops defeated the Rams the following game, 20-14 to advance them on to the Western final with a 23-21 edge in the points total.

In the Western final they met the Edmonton Huskies, who averaged 39 points and allowed only an average of four points a game. The Hilltop underdogs were not phased and overwhelmed the Huskies 39-17 to play for the Canadian title.

Once again the Hilltops met the Ottawa Sooners at the Canadian championship as they had the previous year. The Hilltops won the game 28-7, relying on a running game because of the bad weather conditions at Lansdowne Park in Ottawa. Bob Korpan intercepted two passes and was named the Most Valuable Player of the game.