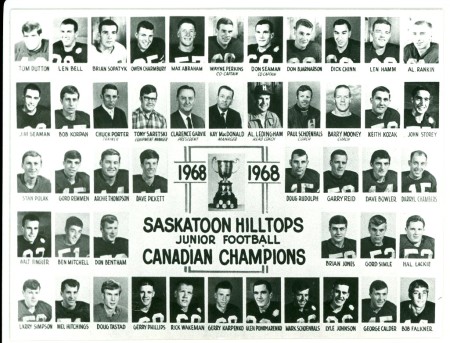 With leadership from veteran line-backers Don Seaman and Mark Abraham along with rookie quarterback Dave Pickett, the Hilltops set their sights on the Canadian championship.

Although Pickett was a rookie he learned and adapted quickly through instruction from head coach Al Ledingham. Pickett had a stellar season, resulting in him being named Rookie-of -the-Year and All-Star quarterback of the Manitoba-Saskatchewan League.

There was a strong rivalry between the Hilltops and the Regina Rams, so when they met in the two game total point league final it was a hard fought battle. The Hilltops won the first game convincingly, 35-15 but fell short in the second game 17-13. With a combined total of 48-32 the Hilltops advanced to the Western Canadian semifinal against the Edmonton Huskies.

The semifinal went right until the very last minute, but with the Hilltops defence stopping all breaks into the end zone they defeated the Huskies 12-7. The Western final was an easier matchup and the Hilltops blanked the Vancouver Meralomas
40-0.

The Hilltops were off to the Canadian finals held in Edmonton versus the Eastern representative, the Ottawa Sooners. This was the first time National T.V. cameras were covering the game. The championship game was a struggle due to injuries, but the Hilltops pushed through adversity to capture the Canadian Junior Football championship with a 28-19 win over the Sooners. Pickett was named the game’s Most Valuable Player, quite an accomplishment given his rookie status. Seaman also had an outstanding performance during the final to cap off his Hilltop career. Seaman was awarded the Manitoba-Saskatchewan All-Star Linebacker all four years of his career, the Dr. Bert Oja trophy for the league’s top linebacker twice and the Hilltop graduate of the year in 1968.