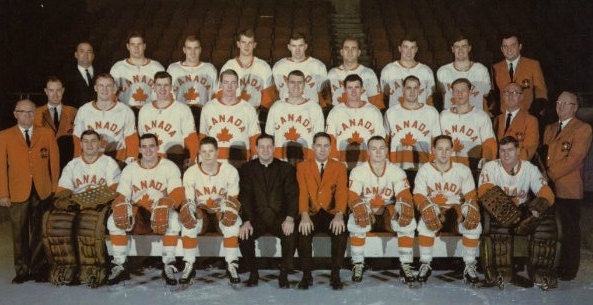 The national team was established in 1965 in Winnipeg, however with competition of pro contracts the Canadian team was made up of amateur players. Fran Huck was an anomaly as he was expected to go to the National Hockey League on a big salary but instead decided to compete with the national team adding another scoring threat to the bench.

In 1968 the team headed to Grenoble, France for the Olympics. This marked the last time that the Olympic games would also serve as the International Ice Hockey Federation World Championships.

The tournament opened with Canada overwhelming West Germany 6-1 with Huck and Mott contributing to the win by getting one goal apiece. The second game was a disappointment for the Canadian team, losing to Team Finland 5-2. Game three was a blowout against East Germany with Canada winning by a landslide victory, 11-0, with Saskatchewan players contributing to more than half of the points, Mott scoring four, Huck recording two and Herb Pinder with a single goal. The next matchup was against Team USA. After a tough battle Canada won by a slim margin 3-2, with Johnston of Saskatchewan scoring the game winner. In the fifth game Canada beat the undefeated Czechoslovakia team, 3-2 with Huck starting off the scoring for Canada. Using their momentum Canada finished off their sixth game against Sweden with a shutout victory 3-0, Johnston and Gerry Pinder both putting points up on the board.

Installed in the Saskatchewan Sports Hall of Fame in 1980.