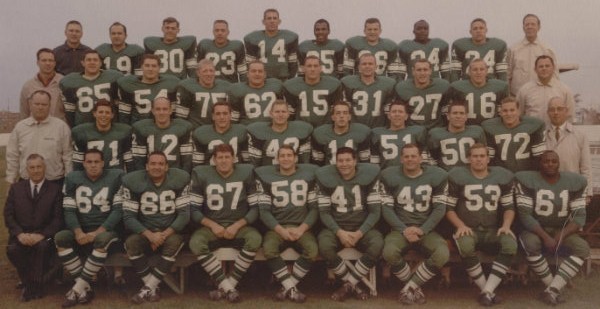 After getting defeated in eight previous Grey Cups the Riders were hungry and eager to get redemption in 1966. This Roughrider team would go down in history as one of the greatest Rider teams, as they were the first Saskatchewan team to ever win the Grey Cup, the symbol of Canadian Football League supremacy. The team’s success was credited to their closeness off the field which contributed to a good team dynamic. It was head coach Eagle Keys that instilled a sense of community and camaraderie among the players, echoing their teamwork on the field.

That year the Roughriders had one of their strongest regular seasons ever with a 9-6-1 record, clinching first place in the Western conference. With a 1,400 yard rushing season, running back George Reed started to become a serious threat to other teams. Ron Lancaster also developed more confidence during the regular season throwing for almost 3,000 yards and connecting on 28 touchdown passes. Hugh Campbell was seen as one of the toughest receivers in the Canadian Football League as he led the league in touchdown catches at 17.

Due to a first place finish in their conference, the Roughriders got a bye into the Western final. The first game of the two game total point series was held in Regina at Taylor Field against the Winnipeg Blue Bombers. The Blue Bombers had a skilled offence but it was no match against the Roughrider defence, who stepped up to make some huge plays. Ed McQuarters put constant pressure on the quarterback, Wally Dempsey shut down their top running back and defensive back, Bob Kosid intercepted 2 passes to win the game 14-7. In the second game the Riders won 21-19 clinching a berth into the Grey Cup final.

As Roughrider fans buzzed with excitement at the possibility of bringing the Grey Cup to Saskatchewan, the Roughriders set off to Vancouver where they would face the Ottawa Rough Riders in the final. Although named eight-point underdogs, the Roughriders kept pace with the Ottawa team. The score was 14-14 at halftime, with a touchdown coming from Jim Worden as a result of a great interception by Dale West and another six-pointer from Al Ford.

As a result of Eagle Keys quick adaptations and innovative ideas, the green and white came out flying the second half. The defence did not allow more than 3 first downs for the rest of the game so the Saskatchewan offence was able to add to the scoreboard. The turning point for Saskatchewan came in the fourth quarter when Campbell caught a bullet pass from Lancaster to put them in the lead 21-14. Adding to the scoreboard, Reed split through the middle for a 31-yard touchdown run to finish off Ottawa 29-14 for their first Grey Cup in franchise history.