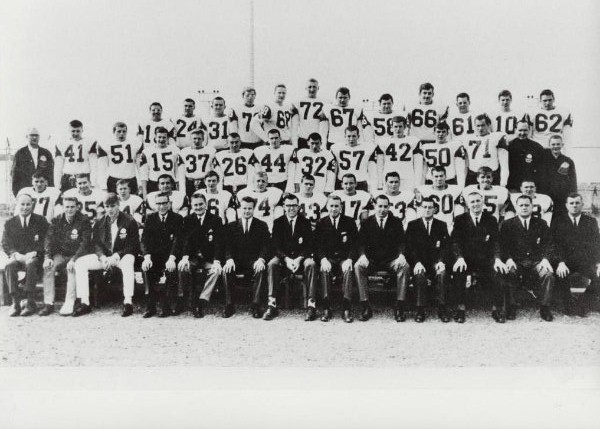 After losing the Western Final in 1965, the Regina Rams were out for redemption in 1966.  They finished first with a record of 5 wins, 3 losses with a total of 17 Rookies on the team.

They met the Saskatoon Hilltops in the Manitoba Saskatchewan Junior Football League Championships, who they defeated 41-17 in a total point final series.

They once again met the Edmonton Wildcats in the Western final.  Although a very tough game, the Rams came out victorious with a close 17-14 win.

This put them in the National final against the Notre Dame de Grace Maple Leafs.  The game was played on November 11, 1966 at Gordie Howe Bowl in Saskatoon.  The Rams were considered heavy underdogs and were even told it was too bad they picked 1966 to try to win.

In the beginning it looked like the critics might be right.  Montreal’s Frank Belvedere took the opening kickoff and returned it 103 yards for a touchdown, a play that could have easily sealed the Rams fate.

The Rams got pretty serious from then on and very quickly rushed for 374 yards as they beat the Maple Leafs 29-14, a 15-point margin, to win the Leader Post Trophy, also known as the Little Grey Cup.

This was the Maple Leafs first loss of the season and cemented the Rams as a hard hitting team to be taken seriously.  It was a championship that ingrained the Rams and their legendary coach Gordon Currie into the fabric of Saskatchewan sport and left a legacy for junior football teams across the city to follow.