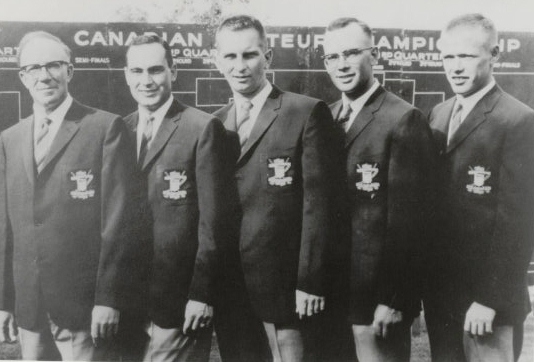 History was made in 1964, as it marked the first time that a Saskatchewan golf team had won the Interprovincial Willingdon Cup team title. The team consisted of Alec Bland (the non-playing captain), Ernie Greenley, Ed Ross, Keith Rever, and Jim Scissons.

The 1964 Canadian Willingdon Cup was held on the Saskatchewan Riverside Golf Course. Playing on such a familiar golf course would prove advantageous for the Saskatchewan team. The first day of the Willingdon Cup, Keith Rever shot a 68, the lowest of the day in the opening round. Ed Ross carded a 71 while Ernie Greenley and Jim Scissons both scored 77’s for an overall total of 293. Despite a fierce 50 mph wind the second day of competition Ross shot a 70, Scissons fired a 74, Rever a 76 and Greenley a 77. The Saskatchewan team came through with a 36 hole total of 590, eight strokes better than the nearest team to become the Canadian Willingdon Cup Team Golf champions.

Individually, Jim Scissons and Keith Rever were inducted into the Saskatchewan Sports Hall of Fame in 1987 and 1991 respectively.