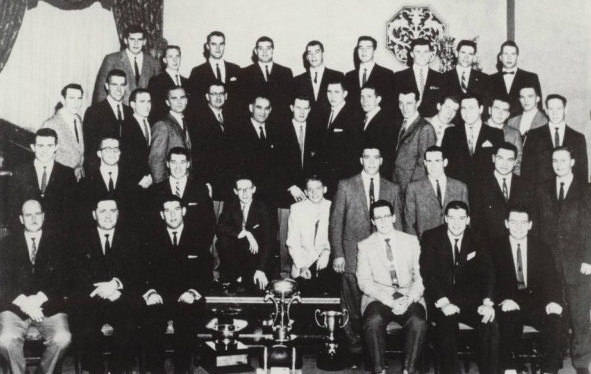 Under the lead of new head coach Ron Tinkler, the 1959 Hilltops went on to win their second consecutive championship. George Werezak led the league in scoring and Brian Casselman was a force to be reckoned with, naming him the Manitoba-Saskatchewan League’s Most Valuable Player.

After dominating league play, the Hilltops met the Winnipeg Weston Wildcats in the league final, defeating them 26-17 to advance on to the Western finals. The Hilltops faced off against the North Shore Cougars of Vancouver to seize the Western title. The Hilltops won by a landslide victory, 61-7, continuing on their run for the Canadian title.

The Canadian finals were held in Saskatoon against their eastern opponents, the North York Knights. In front of their hometown crowd of 5,280 the Hilltops overwhelmed the Knights in a 46-7 victory to capture their second consecutive Canadian Junior Football championship.