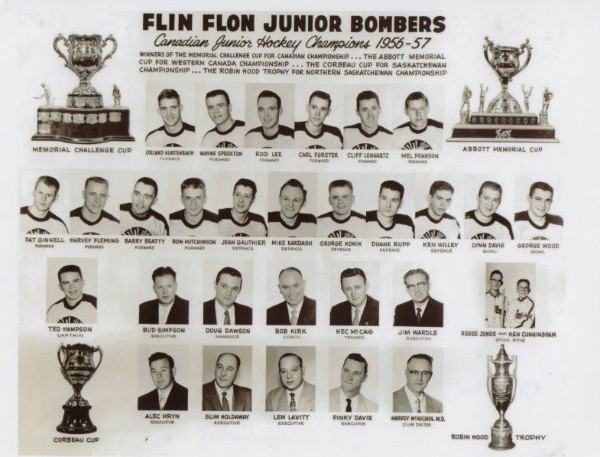 The 1957 Flin Flon Junior Bombers, led by head coach Bob Kirk, were not perfect, but they were extremely close. After reeling off 32 games without a loss, the Bombers finished the Saskatchewan Junior Hockey league (SJHL) season in first place with 48 wins, five losses and two ties. The team’s success continued in the postseason and the Bombers defeated the Humboldt Indians four games to none in the SJHL semi-final and defeated Prince Albert four games to two in the final series to capture the SJHL title. They won the Robin Hood Trophy (Northern Saskatchewan championship) and the Corbeau Cup (Saskatchewan Championship).

The Bombers captured the Western Canadian Championship by defeating the Edmonton Oil Kings four games to two in the semi-final, and sweeping the Fort William Canadiens four games to none to win the Abbott Cup.

The team had their work cut out for them as they faced the Ottawa Canadiens in the Memorial Cup. Their opponents were a powerhouse squad assembled by the National Hockey League’s Montreal Canadiens and coached by Sam Pollock and assistant Scotty Bowman. The first three games were scheduled for Flin Flon, with the remainder in Regina, where Montreal sponsored the junior Regina Pats.

Flin Flon won the first game 3-1, but Ottawa came back to take the next two games 4-3 and 5-2. Moving to Regina, the Bombers took the series lead with 3-1 and 3-2 victories, but the Canadiens fought back to tie the series with a 4-2 victory in game six. On May 8th, 1957, the Flin Flon Bombers took an early 3-1 lead in the final game and not even a last-second goal from Ottawa could stop the Bombers from capturing the Memorial Cup with a 3-2 victory, crowning the team national champions.

The team was inducted into the Manitoba Sports Hall of Fame in 1999 and has been recognized by the Manitoba Hockey Hall of Fame. The city of Flin Flon also celebrated the team’s accomplishments by naming a street in their honour.

Installed into the Saskatchewan Sports Hall of Fame on June 13, 2009.