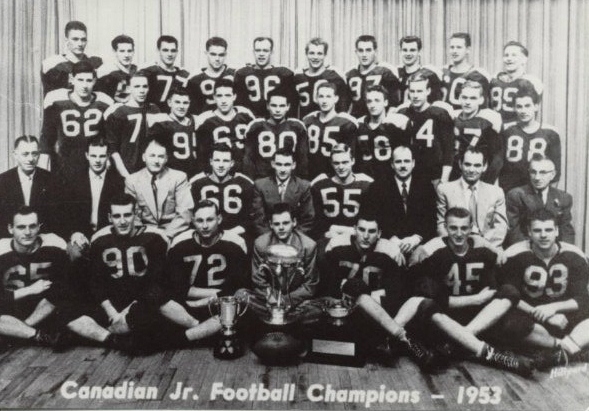 The Saskatoon Hilltops have developed a proud tradition since the club was organized in 1947 and it all started in 1953 when the club won their first Canadian championship. This also marked the beginning of the Manitoba-Saskatchewan league, which included the Regina Bomber-Dales, Winnipeg Rods, Winnipeg Weston Wildcats, and the Hilltops.

With an experienced group of players led by returning head coach Bob Arn and third year quarterback Ron Adam, the Hilltops dominated the new league with a record of seven wins and only one loss. The league final was a two game total point matchup between the Hilltops and the Wildcats. Building momentum en route to the Canadian championship the Hilltops overwhelmed the Wildcats in both games, 35-4 and 25-1.

The Hilltops went on to play the Vancouver Blue Bombers for the Western title. In a landslide victory the Hilltops defeated the Blue Bombers 50-6 giving them a berth to the Canadian Junior Football championships.

Making history, the Hilltops became the first Saskatchewan team to host the Canadian championship. The game was played at Griffiths Stadium in Saskatoon in front of 7,500 fans. The Hilltops did not disappoint the hometown crowd, capturing their first title 34-6 against the Windsor AKO. Much of their success is credited to Hilltops’ quarterback, Ron Adam, who in four playoff games tried 76 passes, completed 49 and gained 941 yards. The next year Hilltops’ captain, Ray Syrnyk and Ron Adam joined the Saskatchewan Roughriders of the Canadian Football League.