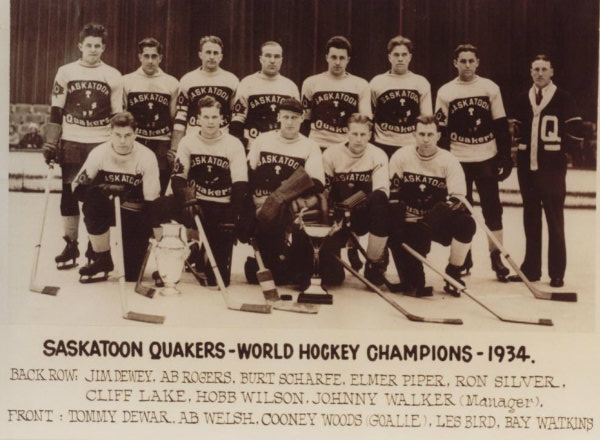 In 1934 the Moncton Hawks, the previous Allan Cup winners were expected to go compete at the International Amateur tournament but due to lack of funding were unable to go. So the runner-ups of the 1933 Allan Cup, the Saskatoon Quakers were chosen to represent Canada on this international playing field. To fund the trip the Saskatoon team manager, Johny Walker secured a sponsorship from Quaker Oats along with the name Saskatoon Quakers.

The team played extra exhibition games in Canada and in an extended European tour using the gate receipts to defray the travel expenses. The Quakers made their way through thirteen different countries including Norway, Sweden, Germany, France, Austria, Switzerland, Hungary and Italy. Representing Canada, the Saskatoon Quakers made their mark, ending off their European tour with a 33-2-1 record and heavily outscoring their opposition 166-21.