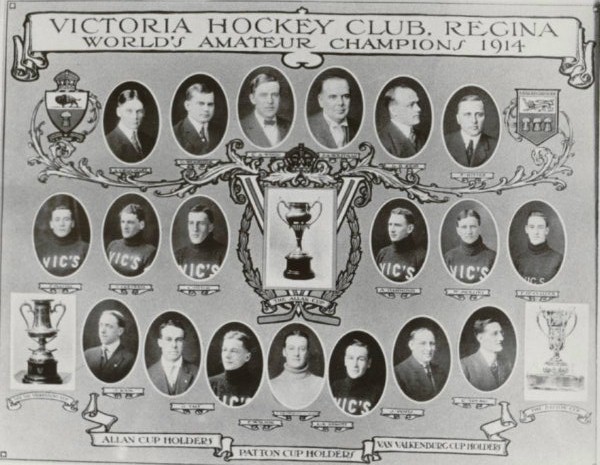 The Regina Victoria Hockey Club was formed in 1913, in their inaugural season the team played 16 games, winning 12 and losing four. After beating the Winnipeg Monarchs, the team that held the championship from the previous season, the Victoria went on to play Grande Mere, Quebec in the final. The club won the Allan Cup in their first year of existence with a final score of 4 to 1.

Many members of the team were impressive athletes, in particular Edward Lyman Abbott. Newspapers referred to Abbott as “the speedy and consistent right wing who is the sharpshooter of the team.” Like many young men of his day, including many of his Victoria teammates Abbott enlisted and was sent overseas. Abbott was awarded the Military cross, and additional Bars to the Cross, for his courage and leadership during the war. Sadly, Abbott was later killed in battle. In his memory the Abbott Memorial Cup was created and awarded annually to the Junior “A” hockey champion for Western Canada from 1919 to 1999.

Richard “Hammy” Hammond was another well-known member of the Victoria. Along with hockey, Hammond competed in track and field events across the province and qualified to represent Canada in the 1912 and 1920 Olympic Games. However, on both occasions another athlete was chosen to attend the games.

Installed in the Saskatchewan Sports Hall of Fame June, 1967.