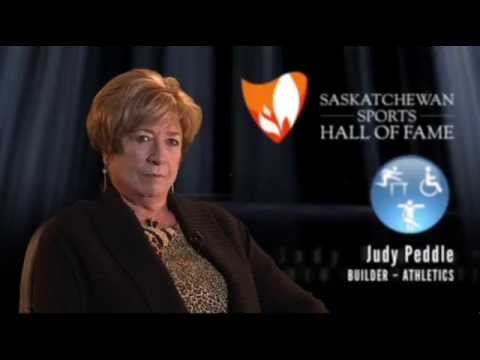 Judy Peddle showed great promise as a track athlete while still in high school. By age sixteen, she had already set a new provincial record for the junior girls 60-yard-dash, and was a member of Team Saskatchewan. A few years after that, she became the national junior champion in the 400m event.

Her career as an athlete was unfortunately cut short by an injury. She required surgery to replace a tendon in her ankle, which left her unable to compete at the same level. Her coach (and fellow Saskatchewan Sports Hall of Fame Inductee) Bob Adams challenged Peddle to remain involved in sport. He invited her to become a manager with the Saskatoon Track and Field Club. It was the beginning of a long and impressive career in sports administration.

In 1993, Peddle became a volunteer in wheelchair athletics. By 1998, she was the Executive Director of Saskatchewan Wheelchair Sports. Additionally, she worked closely with Canada’s Wheelchair Rugby program as an organizer and development coordinator. For her efforts in that sport, she was able to attend the 2000 Paralympic Games in Sydney as a delegate with the Canadian National Wheelchair Rugby team.

Peddle also pursued a parallel career as an athletics official. In the beginning she worked several local and regional meets, including both Canadian Interuniversity Sport and club competitions throughout western Canada. Nationally, she officiated at many junior and senior national championships, as well as the Jeux Canada Games in both 1993 and 2005. She eventually worked her way to a Level 5 certification, allowing her to work as a Chief Umpire and Track Referee at international competitions, including the Commonwealth Games (1978 & 1986), the World Student Games (1983), the Pan American Games (1999), the World Championships (2001), the World Masters Indoor Games (2010) and the World Masters Outdoor Games (2011).