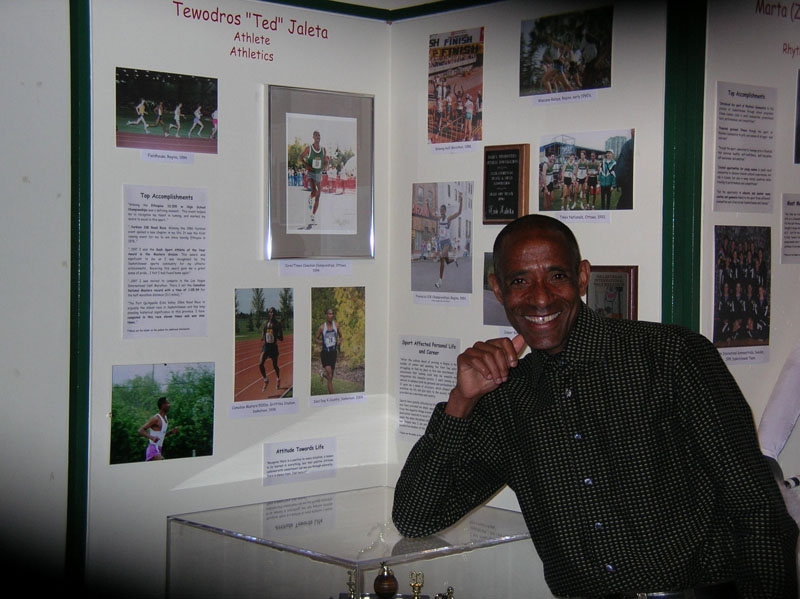 Ted Jaleta was born in Ethiopia and by high school he had gained national prominence as Ethiopia’s national high school 10 000 metre champion.  This resulted in his selection in 1973 to that country’s national junior team, but Ted was unable to reach his goal of the Olympics because of the civil war that struck his country.  Ted was forced to escape from Ethiopia and the turmoil that threatened his freedom and life.  This eventually led to his emigration to Canada in 1982.

After a period of inactivity, Jaleta returned to training and by 1986 was very involved in the long distance running scene in southern Saskatchewan.  His record in distances from 5 km to half marathons is amazing with over 40 victories since his return to training.  Local events that Ted has been victorious in include the Echo Lake Road Race that he has won nine times (including 7 in a row), the Regina Downtown Dash, the Regina Buffalothon, and the Regina Sweetheart Run.

Ted has also enjoyed similar successes in both Manitoba and Alberta with eighteen top ten finishes from 1986 to 2000.  Nationally he was the Canadian Masters Road Race Champion in 1995, 1996, and 1997.  His efforts in the Masters category saw him compete throughout the United States with over twenty-five top five finishes in a variety of competitions.  These successes resulted in him being ranked seventh in the category of international Masters’ Road Racers in 1997.

Jaleta owns a plethora of indoor records in the Masters’ categories for distances in races of 800 metres and up.  He has been honoured as Sask Sport Inc.’s Master Athlete of the Year in 1997 and received the Queen’s Jubilee Medal in 2002.  Ted contributes to the growth of his sport by acting as the distance coach for the Wheat City Kinsmen Track and Field Club.